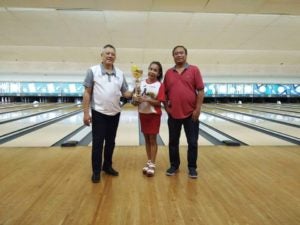 In the distaff side, Uybengkee ruled with her 994 pinfalls.

Emi Osada placed second with 985 pin falls. At third place was senior kegler Baby Bacon who had a total pinfall of 982. Ram Gonzales (897) and Erica Kim (855) managed to make it to the fourth and fifth places, respectively.