Swinenovation: Teaching the young how to make money in pig farming 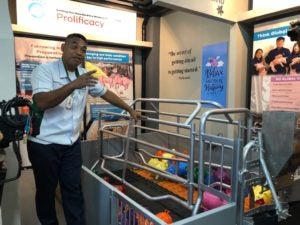 An Excelsior Farms Inc..’s farm manager shows media people some of the equipment at the Swinenovation Learning Center in Barangay Kasambagan, Cebu City during Monday’s tour of the facility. CDN PHOTO/JOSE SANTINO BUNACHITA

PIG farming can still be an attractive and lucrative industry, especially for the young.

With the expected food supply concerns that go with the country’s increasing population, there is also a need for more farmers and those that can incorporate modern technologies in their processes.

This is what Excelsior Farms Inc. wants to achieve as they opened Swinenovation Learning Center in Barangay Kasambagan, Cebu City.

“We want to teach the young, the next generation on how to farm — produce more with less. That’s why we envision to reach out to the young, to make farming attractive to them,” said Paul Holaysan, president and chief operating officer of Excelsior Farms.

In the Philippines, it has become a cultural tradition that farmers in rural areas do their best to send their children to school for them to land jobs in cities.

For them, they do not encourage their children to be “poor farmers” like them.

This kind of mindset is what officials of Excelsior Farms want to change.

Swinenovation Learning Center is set to open its doors to visitors starting next year.

Alvin Hing, chairman and chief financial officer of Excelsior Farms, said they will start sending invitations to schools, organizations, and small backyard farmers to visit their facility and learn more about modern ways of pig farming.

He said there are a lot of agricultural schools, especially in Mindanao, whose students can definitely learn about global standards in pork production through Swinenovation.

The learning center can accommodate small batches of between 20 to 25 people per visit.

There, they will go through a guided tour by a pig farm manager, on the journey of their pigs from birth all the way to pork production. They will also see the different technologies being used and provided by their partners.

Excelsior Farms owns a 30-hectare pig farm in the town of Pinamungajan which started operating in 2015.

The pig farm produces around 6.2 million kilos of pork per year. Of this, around 2 million kilos go to other breeder farms while the rest are produced as pork meat that go to their different clients which produce processed meat mostly in Cebu and the rest of the region.

All of the sows in Excelsior’s pig farm where flown in from the PIC in 2015 from Chicago, USA and in 2016 from Edmonton, Canada.

“These are not local pigs. If we need to produce more from less, we need to have the most efficient animals. We have to improve their quality, leaner, less fat and more meat. They’re done by natural selective breeding,” Hing said.

According to PIC Philipines General Manager Vino Borromeo, their objective in opening up Swinenovation would be to help increase pig farming standards in the country, and help produce more food.

“We’re looking at quality pork in a global standard and to make it more accessible to Filipinos. So how do we help the industry? Bring the standard up? That is the objective of the center. We want to help our people to be able to understand how we produce pork,” he said.

Holaysan added that one of the biggest challenges for current pork producers is the lack of technology.

He said that most pig farmers had stuck to their old ways, but these could not anymore sustain the growing demand for food.

Big Dutchman Philippines Managing Director Patrick Ty added that Excelsior Farms acts as a catchbasin for new and innovative technologies in pork production through its partners.

The PIC is focused on genetics, and research and development in improving pork production while Big Dutchman and Cargill work on bringing in new equipment for pig farms as well as feeds.

Excelsior Farms want to share all these information, which come from all over the world, through their learning center.

Meanwhile, Cebu is the fourth top pork-producing province in the country. The first is Bulacan, followed by Batangas and Bukidnon.

Hing said that each Filipino would consume an average of 15 kilos of pork a year.

With the current population of around 100 million, he said, that this would mean that the Philippines would consume 1.5 billion kilos of pork a year.

He added that with this total demand, the country was still importing around 400,000 kilos of pork a year from other countries.

He said that this would show that there is still a market for pork in the country for local producers.

Read Next
All that glitters to launch Holiday 2018 Collection on Oct. 12 and 13