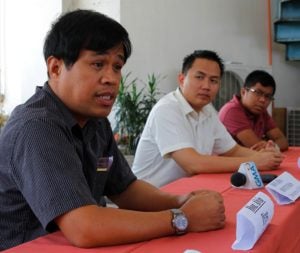 THIS early, former Cebu City Councilor Alvin Dizon can already count on the support of the so-called marginalized sector after the Akbayan Partylist threw its support behind his bid to return to City Hall.

Yesterday Dizon filed his Certificate of Candidacy (COC) in the Commission of Elections (Comelec) while the Akbayan Youth Movement, a sub-organization of the party list, conducted a rally outside the Comelec against the Train Law.

Aubry Jan Ampoon, President of the Akbayan Youth Movement, said they are supporting Dizon due to his experience as a member and pioneer of the Akbayan Partylist.

Ampoon also cited Dizon’s programs and advocacies which he said are similar to those being supported by Akbayan National.

Ampoon is also hoping that other candidates will consider the plight of the poor in light of today’s soaring prices of goods.

Read Next
Cortes and Ahong confident of winning