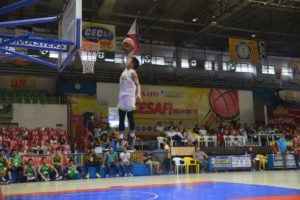 THE UNIVERSITY of the Visayas high-leaping Baby Lancer, Popoy Actub, nabbed the number one spot in Week 7 of the Chooks to Go/NBTC Cesafi 24 rankings, ending the five week run at the top by teammate, Joshua Yerro.

With Yerro getting ejected from their game against the Ateneo de Cebu and subsequently serving a one-game suspension, Actub stepped up with 28 points, 10 rebounds against the Magis Eagles.

He followed that up with 14 points, 12 rebounds and three assists against Don Bosco.

Making it a trifecta of Baby Lancers was reigning league MVP Beirn Laurente who nabbed the third spot.

Completing the top five were Koko Tuadles of Ateneo de Cebu and Justin Mondares of the University of Cebu.

There will be three separate editions of the NBTC 24 – one for the NCAA, one for the UAAP, and one for the CESAFI – to accommodate the Juniors calendar for the whole year.

After all three editions have been completed, the final 24 will be chosen to participate in the annual NBTC All-Star Game in March.