How to be truly happy 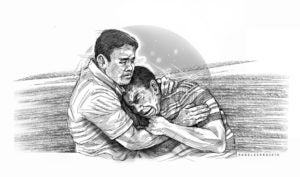 How a person behaves in a queue is an index of his character.

If he cuts in he is probably someone who does not respect the rights of others.

I’ve seen people do this shrewdly.

Taking advantage of a pause, they engage someone ahead of them in conversation, and then insert themselves into the line when it moves again.

Since this happens very quickly and while the queue is progressing, those behind find it pointless to complain.

Obviously, we all want to be in front, to be, so to speak, the first to enter and be entertained.

We scramble for the front positions, jockey ourselves into the best places.

In the matter, the apostles were no exception.

Mark writes that the brothers James and John came to Jesus and made this request, “Grant that in your glory we may sit one at your right and the other at your left,” which Jesus firmly denied, saying that “to sit at my right or at my left is not mine to give but is for those for whom it has been prepared.”

When the ten other apostles heard of this, they became indignant.

This gave Jesus an occasion to lecture them on the kind of authority he prescribed for his follower — “You know that those who are recognized as rulers over the Gentiles lord it over them, and their great ones make their authority over them felt. But it shall not be so among you. Rather, whoever wishes to be great among you will be your servant; whoever wishes to be first among you will be the slave of all. For the Son of Man did not come to be served but to serve and to give his life as a ransom to many.”

Happiness is the order of the day. Aristotle said that everything we do we do in order to be happy.

Fr. Robert Spitzer took this as his cue to propose four levels of happiness.

The first level is that of instant gratification, the satisfaction of the senses, of mostly bodily needs–food, clothing, shelter, sex.

The happiness one enjoys on this level, however, while immediate, is short-lived.

The second level is that which seeks the satisfaction of the ego, of the need for glory, to be at the top, at the center, which striving necessitates competing with and besting others.

Here the happiness that one enjoys is passing, and, when one’s fifteen minutes of fame is over, often ends in frustration and hopelessness.

The third level, unlike the second, is other-oriented.

One seeks happiness in service, in making a difference to others, especially the needful.

This is the happiness that Jesus desired for his followers.

This happiness is pervasive and enduring.

One should not settle with just the third, however, but should strive for the fourth level, which promises a happiness which is for always.

This is the happiness that is born of faith in and intimacy with God, which happiness St. Augustine found after a life of worldly pleasures and intellectual pride.

“Lord, you have made us for yourself, and our heart is restless until it rests in you.”