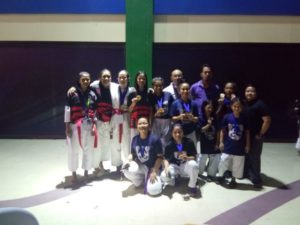 THE Cebu Province karatedo team that put up a good showing in the 5th Women’s Martial Arts Festival 2018 in Manila held last October 23 to 25.

The team, which also had a decent performance in the Batang Pinoy National Championship in Baguio City last September 17 to 22, finished with four gold medals, two silvers, and six bronze medals.

The team was composed of karatekas from the Association for the Upliftment of Karatedo (AUK), and the Sports Karatedo Organization (SKO).

Most of the karatekas who vied in the tournament contributed to the seven-gold-medal-haul of the Cebu Province in the Batang Pinoy National Championships.

The team was coached by Jim Paredes and Jess Paredes.

AUK’s gold medalist was Maria Cassandra Samson, who topped the cadet/beginner’s kata in the 14-15 years old category under the tutelage of coach Rhodee Reynes Saavedra.

Aside from karatedo, the three-day event featured the national sports arnis and other martial arts disciplines such as judo, taekwondo, muay thai, pencak silat, wrestling and fencing.