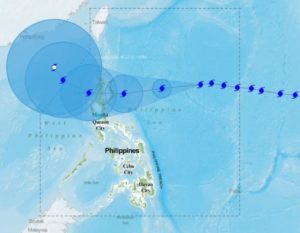 Typhoon “Rosita” maintained its strength as it continued to move west toward Luzon, the weather bureau said Sunday.

The Philippine Atmospheric, Geophysical and Astronomical Services Administration (Pagasa), Rosita was spotted at 960 kilometers east of Aparri, Cagayan, as of 4 a.m.

It is moving west at 20 kilometers per hour (kph). Rosita had maximum sustained winds of 200 kph and gustiness up to 245 kph.

Pagasa repeated its warning that it might raise a typhoon signal over the eastern section of northern and central Luzon by Sunday evening.

The weather bureau said Rosita would not yet directly affect the country before evening but bring cloudy skies and light rain over the Cordillera Administrative and Cagayan Valley Regions.