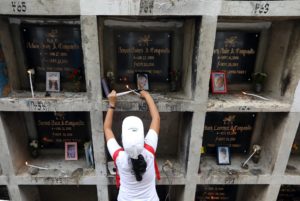 40 DAYS. A relative lights candles and offers prayers in front of the tombs of the 16 members of the Campanilla family, who died in the Naga landslide last September. This was her way of marking the 40th day since the tragic landslide, which claimed the lives of more than 70 people in Naga City. (CDN PHOTO/TONEE DESPOJO)

PRAYERS for the victims of the massive landslide in Sitio Sindulan, Barangay Tinaan, resonated in the City of Naga Public Cemetery on Monday, October 29, as they commemorate the 40th day since the tragedy claimed the lives of at least 78 persons.

Allan Sayson, a resident of Sitio Grayrocks in nearby Barangay Pangdan, went to the cemetery in the afternoon to look after the laborers in the cemetery whom he commissioned to install the tombstone and adorn the tombs of his younger sister, Zenie Campanilla, and her family.

Zenie, her husband Leo, and daughters Lovely Shen and Larlyn Shem, were among the 16 members of the Campanilla family who all perished in the slide.

This is the first time that Sayson visited his sister and her family’s tombs since they were interred last September 24, heeding to the Filipino tradition on visiting the dead.

Forty days after the tragedy, Sayson said they were still fighting the grief and pain of losing their family members.

(The pain will never go away, but we started to accept it because this is a tragedy and nobody wanted this to happen.)

Sayson, 38, however, said their family would continue their call for justice for the death of their loved ones.

Sayson said they wouild be submitting their affidavit to the pool of lawyers who are preparing a P1-billion class suit against the Apo Land and Quarry Corporation (ALQC), city government of Naga, Mines and Geosciences Bureau and the Department of Environment and Natural Resources (DENR).

(We just want justice because they are the reason behind that landslide in Sindulan.)

The volunteer lawyers headed by environmental lawyer Benjamin Cabrido initially planned to file the case today, in time with the 40th day commemoration.

However, a source of Cebu Daily News said they had yet to complete the affidavits of the other landslide victims who were not able to file their affidavits on time.

Meanwhile, the Naga City government will be holding a Mass today for the eternal repose of the landslide casualties.

A Holy Mass will be celebrated at 7 a.m. in the chapel near the ground zero in Barangay Tinaan and another Mass at the St. Francis of Assisi Parish in Central Poblacion at 10 a.m.

Naga City Councilor and Disaster Management Office head Junjie Cruz said they would continue to encourage the landslide victims and their families to pray and turn to their faith in these trying times.

“Let us continue to pray for the eternal repose of the souls of those who died during the landslide incident and also for emotional and spiritual strength of the survivors,” Cruz said.

Read Next
PRO-7 set for Senate probe on Cebu killings