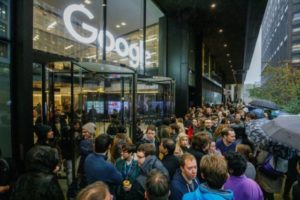 Google staff in London were among employees to walkout as part of a global campaign over the US tech giant’s handling of sexual harassment.
/AFP

Thousands of Google employees joined a coordinated worldwide walkout Thursday to protest the US tech giant’s handling of sexual harassment as the chief vowed “concrete steps are coming” in response to the concern.

Google employees poured out of buildings at the company’s Silicon Valley “Googleplex,” filling courtyards and patios in solidarity with workers around the world who held similar protests over the company’s handling of sexual misconduct.

Demonstrators streamed across the Mountain View campus, some waving signs bearing messages such as “Time’s Up Tech” and “Happy to quit for $90 million – no sexual harassment required.”

The turnout in California was the final stage of a global walkout that began in Asia and spread to Google offices in Europe.

Some protesters chalked statements such as “Not OK Google” in large letters on pavement as television news helicopters circled overhead.

Pictures, videos and comments steadily flooded a freshly-launched “Google Walkout For Real Change” account on Twitter as employees and contractors left their workplaces to rally.

“There’s been anger and frustration within the company,” Google Chief Executive Sundar Pichai was quoted as saying at a New York Times Dealbook conference on Thursday.

“At Google, we set a very high bar, and we clearly didn’t live up to our expectations.”

Pichai was quoted as saying Google has “drawn a very hard line” on improper behavior in recent years but that “moments like this show we didn’t always do it right.”

He reportedly added that “there are concrete steps coming up.”

In New York, where Google has a large office in the Chelsea neighborhood, hundreds of employees took to the streets.

“I think we are a really powerful collective and we all want to see change,” said Claire Stapleton, one of the New York organizers. “I think leadership is listening.”