Nietes vs. Ioka fight is huge for Asia 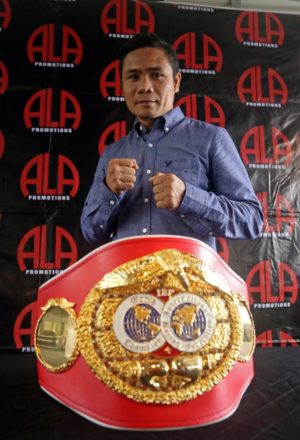 This is, at least, what ALA Promotions International President Michael P. Aldeguer believes.

“This fight is huge for Asia as it involves three powerful boxing countries: Japan and the Philippines. And both camps agreed to choose Macao, China as the venue,” Aldeguer said.

The super fight was announced in Panama during the ongoing WBO annual convention which Aldeguer is attending.

“Tom Leoffler is involved, too, as he was part of the career of Nietes and Ioka the past year with Superfly,” said Aldeguer. “In principle, the fight is a done deal. We just have to sign contracts to seal it. ALA Promotions and TLAROCK will work on the event together with the Promoter from China, who we will announce soon.”

According to Aldeguer, although the fight was already approved by the WBO, they will still be negotiating with the stakeholders of the bout before they will sign the contract to finalize the fight.

The 36-year-old Nietes, a native of Murcia, Negros Occidental sports a record of 41 wins (23 by knockouts), one defeat and five draws.

Nietes’ fight against Palicte was hounded by controversy. One of the judges, Max de Luca, scored the bout even while the other judge, Robert Hoyle, favored Palicte.

The third judge had it for Nietes.

But a lot of boxing experts believed Nietes won the bout fair and square.

There were initial talks about a rematch between Nietes and Palicte but was later called off to pave the way for a bigger fight for the champion.