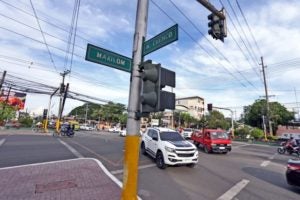 An advanced intelligent transportation system (ITS) created by a Taiwan-based firm will soon be installed at the intersection of M.J. Cuenco Ave. corner General Maxilom Ave. in Barangay Carreta, Cebu City, to test if it will ease traffic congestion and provide means to catch criminals.
CDN PHOTO/JUNJIE MENDOZA

CEBU City may finally have an advanced intelligent traffic management system that will not only reinforce existing traffic rules and regulations but also help catch criminals.

In a post on his official Facebook page, Cebu City Mayor Tomas Osmeña announced they will be soon conducting the pilot testing of an intelligent transportation system (ITS) created by a Taiwan-based firm.

“ITS is a system that combines CCTV (closed-circuit television) and AI (artificial intelligence) software to automatically capture and record traffic violations while registering the plate numbers of the vehicles involved. It can also be combined with facial recognition software to assist in addressing crimes,” said Osmeña on his post.

While they expressed support for the local government’s plans, members of the business sector urged them to effectively maintain and maximize the use of this type of technology so it wouldn’t fail.

The Cebu City Transportation Office (CCTO) said the intersection of M.J. Cuenco and General Maxilom Avenues in Barangay Carreta is the area identified for the pilot test of the ITS.

The dry run is expected to start next week but the specific dates, however, are yet to be finalized.

Councilor Jerry Guardo, in a statement sent to reporters on Saturday, said the city is yet to enter into a memorandum of agreement (MOA) with the private firm, which is needed before they can proceed with the pilot test.

The representatives from the Taiwan-based firm Leotek are expected to be in the city anytime next week.

CCTO chief Francisco Ouano, on the other hand, said the findings and recommendations of the pilot test will be used to determine if such intelligent traffic management system is feasible in Cebu City.

“The results of the pilot test will also be furnished to our office. After a month, we will be meeting with the representatives from the private firm to discuss about the matter,” said Ouano.

The ITS proposed for Cebu City is created by Leotek, a subsidiary of LiteOn Technology Corp., one of the world’s largest firms engaged in manufacturing electronics, including those needed for traffic management.

Leotek’s headquarters is located in Silicon Valley, California with its Asia, Middle East and UK branch based in Taipei, Taiwan.

Guardo unveiled the ITS’ designs last October after the city government sought the need to upgrade its current traffic management system to help improve the city’s traffic condition.

But with crimes recently reported in the city, including killings and robberies, the government has also planned to maximize this type of technology to help in the peace and order situation.

Both the ITS’ pilot test, and its possible implementation in the future, will be of no cost for the government.

ITS for traffic and crimes

The highlight of ITS is non-contact apprehension, which will aid law enforcers on implementing traffic rules and regulations.

In this manner, every data gathered through recorded CCTV footages and other devices will be used to trace traffic violators.

An ease in the city’s worsening traffic condition is also expected if the ITS will be implemented.

Cebu City currently uses a Sydney Coordinated Adaptive Traffic System (SCATS), which needs a serious upgrade since most of its components are either not functioning or already outdated, Guardo said in an earlier interview.

In line with the preparations of the pilot testing of ITS, more CCTV cameras will be installed in various areas in Cebu City.

This will be on top of the over 100 existing ones owned by the city government.

The city government has been eyeing to install more CCTVs around the city following recent reports on robberies and holdups.

One case led to the death of call center agent Loraine Temple after she attempted to fight with robbers while she was walking along Pope John Paul II Avenue in Barangay Mabolo at dawn on October 3.

“Over the next few months, we will be evaluating how well the system works. If it functions as intended, it will be installed in all major intersections as well as high-risk areas where it will help deter crime,” Osmeña said.

Councilor Dave Tumulak, deputy mayor on police matters, said the CCTVs will aid the ITS by monitoring the streets, delivering real-time updates and data. However, he refused to divulge the exact locations or areas where they will be placed for security purposes.

The news of an advanced intelligent traffic management system for Cebu City, that functions not only to alleviate traffic woes but also prevent crimes, delighted some members of the business community.

In a text message sent to Cebu Daily News, Carlo Suarez, president of the Hotel Resort and Restaurant Association of Cebu (HRRAC), welcomed the plans of the city government.

“I would personally agree to this move since one of the main concerns in our society now is safety and security. This will be a good measure to ensure that we can monitor the safety in our premises,” Suarez said.

In the event the ITS will push through, both Suarez and Joseph reminded the city government to implement it effectively and properly.

“As long as they can install, and effectively maintain the system, this is a great idea,” Joseph added.