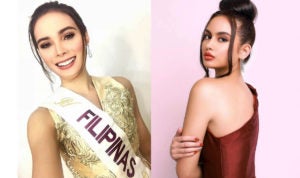 THE PHILIPPINES’ representatives to the Miss Earth 2018 and Reina Hispanoamericana 2018 pageants failed to bring home the crown for the country.

Celeste Cortesi finished in the top 8 during the Miss Earth 2018 pageant held November 3 at the Mall of Asia Arena. Phuong Khanh Nguyen of
Vietnam won the title, succeeding Miss Earth 2017 Karen Ibasco of the Philippines.

On the other hand, Alyssa Muhlach of the Philippines bowed out early in the Reina Hispanoamericana 2018 pageant, failing to make it to the first cut—the top 10.

Winning the crown was Nariman Battikha of Venezuela during the coronation night held on November 3 (Bolivia time) at Sta. Cruz, Bolivia. She succeeded Reina Hispanoamericana 2017 and actress Teresita Ssen “Winwyn” Marquez of the Philippines.

The question was, “Being a millennial, what do you think is the most pressing issue of your generation?”

Nguyen answered, “Good evening, everyone. My answer is, the pressing issue of my generation is our ignorance. We have so many technology and we just use social media and we just care for ourselves. We should spend our time to think and feel what is happening with Earth right now. One small
action multiplied by million people can transform the world.”

A celebration of Hispanic heritage, language and culture, the Reina Hispanoamericana pageant started in 1991.

The Davao beauty is the successor of Miss World Philippines 2017 Laura Lehmann who finished in the top 40 last year.

So far, only Sultan Kudarat native Sharifa Areef Mohammed Omar Akeel has won an international crown for the Philippines since pageant season began since October.

A native of Lapu-Lapu City, Patalinjug failed to make it to the top 20 during the coronation night held in Myanmar last October 25.