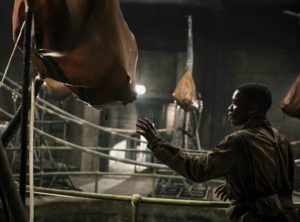 No, I’m not speaking of the old 16-bit PC computer “first person” shooters of the mid-1980s where you creep along from one end of a spooky castle to another trying to find “powerups” as you fight your way through seemingly endless hordes of pesky critters to “advance” and face the most hideous zombie creations.

Nah, I’ve played all of those and then some.

I’m speaking of today’s photo-realistic, incredibly detailed console and PC games that will have you, quite literally, at death’s door as you fight back against a monstrous horde so realistic you can smell the decay peeling off the rotten flesh.

This “up close and personal” interaction awaits you when you take in “Overlord” the latest film presentation from uber producer J.J. Abrams (“Star Trek”) and Australian director Julius Avery (“Son of a Gun”) who will pull you back in time to World War II and drop you right into their own little slice of Hades.

Not free of charge, of course. You still have to pluck down your pesos and buy a ticket. 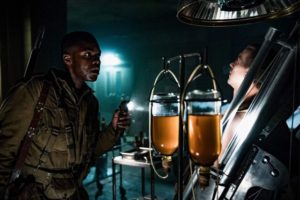 And when you do, the theater ticket takers should also hand you a rifle, helmet and a strong belt to hold up your pants when you are unceremoniously plopped into a rampaging firefight between Allied forces and something else.

Here is the official synopsis:

“On the eve of D-Day in 1944, American paratroopers drop behind enemy lines to penetrate the walls of a fortified church and destroy a radio transmitter. As the soldiers approach their target, they soon begin to realize that there’s more going on in the Nazi-occupied village than a simple military operation. Making their way to an underground lab, the outnumbered men stumble upon a sinister experiment that forces them into a vicious battle against an army of the undead.”

Using the popular “Call of Duty: Black Ops” PC computer game series (of course in “zombie mode”) as its foundation, “Overlord” doesn’t skip on the suspense when the four remaining American soldiers (of the original team of more than 20) join with the French resistance to battle their way into the church and are confronted with something completely unexpected.

Please allow me to digress a moment and share something deeply personal. 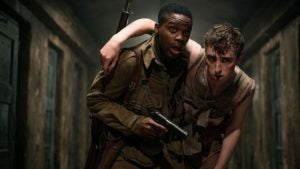 I have a brother, five years older than I, who loved to frighten the hair off my young head.

One evening, at the tender age of seven, I was padding down a darken hallway from my bedroom to our living room when he leaped out at me from the darkness as if one of the living dead.

Instantly cowering on the ground, my pants quickly wet and soiled, I can still remember him hovering over me, leering, as I wept and pleaded over and over … “please don’t hurt me.”

That feeling of complete helplessness is exactly what these few brave men have to face when they find out what the Nazi are doing in their experimentations of local French residents.

That’s when the film turns instantly from WWII docu-drama to supernatural sci-fi horror as if you flicked a switch to turn off the lights.

Film horror—as in my own terrifying real life experiences—only works when you are confronted with the completely unexpected and “Overlord” delivers in spades. 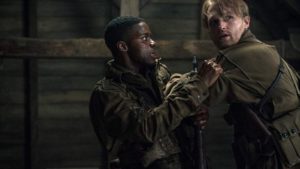 Completely original, “Overlord” is an action-adventure ride akin to the very best PR games around.

Special mention needs to be given to Jovan Adepo (“Fences”) who plays Boyce, a lowly private who grinds his way through a meat market of gnarled bones, walking corpses and the most evil Nazis you can swing a swastika at and Wyatt Russell (“22 Jump Street”), as Ford, his commanding officer who also is confronted with pure evil.

It wasn’t fair what happened to me as a small boy—being constantly terrorized by my older brother. 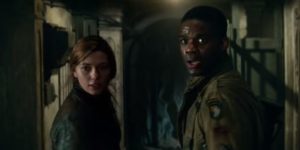 So too is the choice to take in the experience of “Overlord” so please heed this message from a previously traumatized youngster and do not expose your children (under the age of 16) to this movie.

Because one evening, they too may be whimpering in the darkness … “Please don’t hurt me.”

Questions, comments
or travel suggestions,
write me at [email protected]