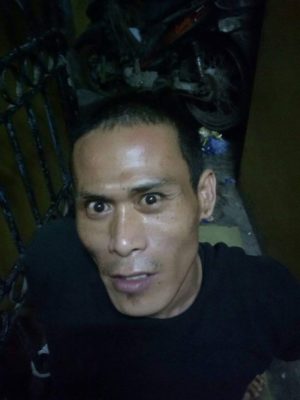 A known robber, the suspect denied having a hand in the crime

A slip of the tongue could mean the end of Eric Ramos’ days as a free man.

This after Ramos, 30, accidentally told a police informant about robbing and shooting a taxi driver on Wednesday night inside a subdivision in Barangay Tisa, Cebu City.

Ramos was at home drinking with a friend when he bragged about shooting taxi driver Victorio Molina, 57, last Wednesday.

The informant immediately reported to the police what Ramos told him which led to the suspect’s arrest last Friday afternoon in his home also in Barangay Tisa.

Upon searching his house, police saw the clothes the suspect allegedly was wearing when he shot Molina hanging on a clothesline.

“The striped shorts and the white shirt matched with those in the CCTV (closed circuit television) footage,” said Police Investigator Deogracias Clarin, chief investigator of the Punta Princesa Police Station.

Clarin said Ramos has been linked to at least three other robbery cases including a robbery with homicide.

Ramos however, denied making the confession and killing Molina saying he was at home painting his house at the time of the incident.

“Wala gyod koy kalabutan anang driver. Naa ra gyod kos balay ato. Wa ko kasabot ngano ila ko gidakop. (I don’t have any involvement with the taxi driver’s death. I was at home at that time. I don’t understand why I was arrested),” said Ramos.

He said that he has been staying at home for three months now after he was shot in the stomach by the police during an alleged robbery.

He admitted though, that he was once charged with murder some years back for killing his cousin who allegedly stole some goods from his family’s convenience store.

The case, he said, was dismissed because the family of the victim did not pursue it.

Clarin said that Ramos is a known robber in the area and has been caught multiple times.

Ramos is the kind of robber who is wont to kill his victims, Clarin added.

Clarin said they are still looking for the the other suspect who was also seen in the CCTV footage mounted on one of the houses in the subdivision where Molina was killed.

“We are still looking for the other suspect. It is difficult because he (Ramos) is uncooperative,” said Clarin.

Clarin said a charge for either murder or robbery with homicide may be filed against Ramos and the other suspect.

Molina, a resident of Lapu-Lapu City, was shot dead inside his taxicab on the night of November 8 after being allegedly robbed of his earnings.

Clarin said they recovered the dashboard camera of the victim’s taxi which could have helped them solve the crime but IT experts whom they consulted, told him that the camera was beyond repair.

Clarin believes that the dashboard camera was intentionally destroyed by the suspects.