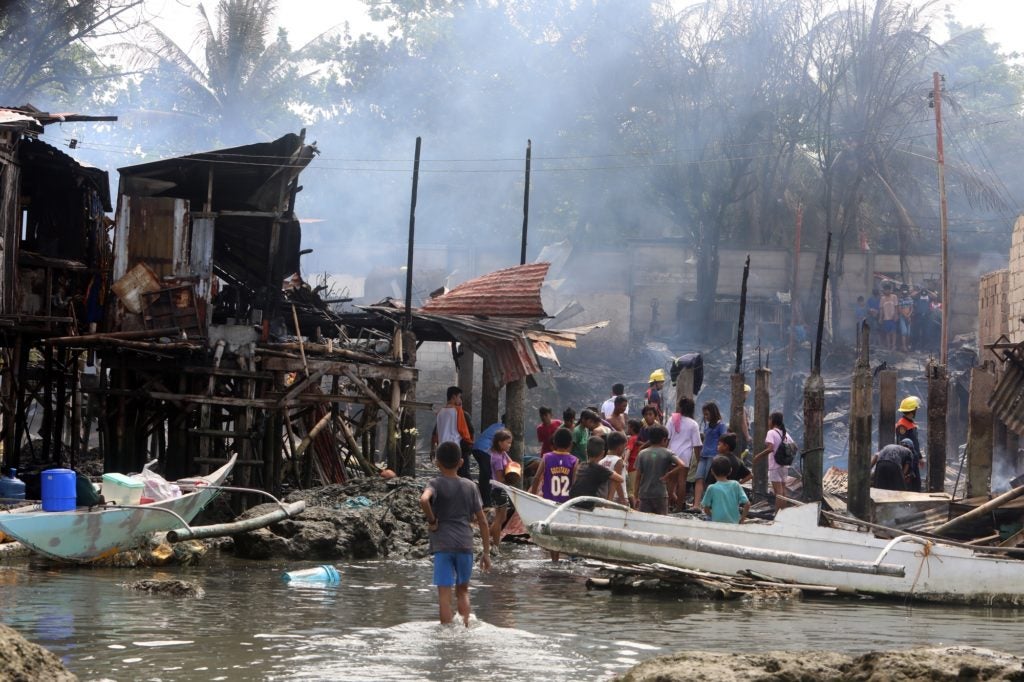 Seventeen households that just barely recovered from the fire that hit Sitio New Paradise of Barangay Pajo in Lapu-Lapu City some eight months ago lost their homes anew to a fire that engulfed the small coastal community on
Sunday.

They were among the 47 households, involving 253 individuals, who were rendered homeless by Sunday’s 30-minute fire in Sitios New Paradise and Kitchen.

Ironically, yesterday’s fire that started in an abandoned house in Sitio Kitchen was allegedly caused by two alleged drug users, one of whom was the woman who had lost her two young children to the fire that destroyed over 300 houses in the same sub-villages and its neighboring areas last March 16.

Fire authorities in Lapu-Lapu City said that several victims of yesterday’s fire were willing to testify they have seen Jennifer Cañedo and a certain “Tado” at the abandoned house where the fire originated a few minutes before the structure was gutted by the fire.

It was in Cañedo’s house that the fire on March 16 this year had originated, killing her children Kent Cyril Cañedo, 1, and Yoko Han Cañedo, 3.

The victims in Sunday’s fire now wanted to pursue an arson case against Cañedo and Tado, whom they believed to have caused the fire.

The house where Sunday’s fire began had been abandoned by its owner, Hernan and Riza Moises, almost a year ago after they had moved out of Sitio Kitchen, said a neighbor, Rodel Valiente.

Since the Moises family had moved out, neighbors have noticed that the same house had been frequented by drug users, according to a number of affected residents interviewed by Cebu Daily News.

Police report
According to Pajo Barangay Captain Junard “Ahong” Chan, the residents in Sitios Kitchen and New Paradise have already reported to the police what were the goings-on at the abandoned house.

He said that Jennifer Cañedo was known in their community as an alleged drug user. She and Tado, he said, were believed to be having a drug session at the abandoned house when they allegedly caused the fire.

Cañedo, 28, disappeared for a while from the village after she lost her two children to last March’s fire, according to residents there.

It was another child of Cañedo, a five-year-old, who allegedly started last March’s fire after playing with matchsticks.

The five-year-old survived the fire but the charred remains of Cañedo’s two other children — who were in the second level of the house owned by Jennifer’s parents — were found at their burned house the following day, March 17.

The fire in March displaced 353 households, involving about 2,000 individuals, not just in Sitios New Paradise and Kitchen but also in the neighboring sitio of Camansi.

On Sunday, the residential houses near the shores of Sitios Paradise and Kitchen that were razed by fire were initially counted to be numbering 47, affecting 235 individuals, according to Chan.

FO3 Rufred Amores, fire investigator of the Lapu-Lapu Fire Central District, said they received the fire alarm at 9:30 a.m. with a status raised to third alarm before it was controlled at 10:01 a.m.

This time, nobody was reported injured during the fire incident.

The damage was pegged at P75,000 considering that all the involved structures were made of light materials, said Amores.

Evidence needed to prove arson
Fire Chief Investigator SFO2 Climaco Salisid confirmed that he received a report that neighbors of the Moiseses have claimed to have seen some people at the abandoned home and who were believed to have caused the fire.

But he declined to conclude those were Jennifer Cañedo and a certain Tado, as they still have to verify whether these witnesses really saw the suspected persons setting the house on fire to prove that an arson case existed.

Chan, on the other hand, said he would also want to verify the claim of arson leveled against Cañedo and a certain “Tado.”

Chan added he would also have to talk first to the owner of the abandoned house, Hernan Moises, who is a traffic enforcer of Lapu-Lapu City.

Food and shelter
Meanwhile, the City Social Welfare and Development (CSWD) of Lapu-Lapu City and Barangay Pajo personnel responded immediately and prepared hot meals for the fire victims who were likewise provided with additional food packs, utensils and beddings.

Chan said the hot meals for the fire victims are usually provided by the city government for up to three days.

Personnel from the Philippine Red Cross also took care of the individuals who might be in need of emergency medical assistance.

The affected residents mostly remained in the fire area, after they were provided with tents as temporary shelter, lighting facility, and drinking water by the barangay government of Pajo and the City Disaster Risk Reduction Management Office (CDRRMO).

Fewer residents lost their homes this time because the area had been reblocked following last March’s fire, said Chan.

The fire-hit area also involved several houses that were already up for demolition, as these were located along the shores and encroaching on the three-meter easement zone.

In fact, demolition notices had been given to the owners of some of these houses that were razed
yesterday, said Chan.