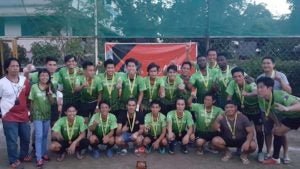 Members of the Makoto team that won the Inter-Company title of the Aboitiz Football Cup.
CONTRIBUTED PHOTO

For the first time in several meetings, Makoto was finally able to defeat defending champions Leylam. And it came at the most crucial time.

Makoto downed Leylam,  2-0, in the finals to clinch the Inter-Company title of the 20th Aboitiz Football Cup last Sunday afternoon at the Paref Springdale field.

Makoto found the back of the net ahead of multi-titled Leylam courtesy of Yves Caballero just 15 minutes into the finals match.

Ren Okuda sealed the title for Makoto with another goal in the 17th minute of the second half.

Okuda was named as the Most Valuable Player while three of his teammates also received special awards.

Caballero, a former University of San Carlos standout, bagged the Golden Boot award, Limhar Baunsit was named Best Defender while the Best Goalkeeper award was given to Imran Hussain.

The Best Midfielder award went to Raffy Llorente of Leylam.

ERCO settled for third place after a 1-0 edging of Motorren.

Makoto advanced to the championships with a 5-0 routing of ERCO while Leylam thrashed Motorren, 8-0, to book its finals ticket.

In other categories played at the Paref Springdale pitch, the Accenture clinched the BPO Ladies title with a 2-0 blanking of EPerformax while third place was salvaged by JP Morgan via a 5-0 routing of Convergys.

Over at the Don Bosco Magone field, the Rising Sun blanked Don Bosco United FC, 2-0, for the 38-Above title. Third place went to Queen City United, which prevailed over ERCO via penalty shootout, 7-5. Regulation ended at 2-all.