AMAZING JOURNEY OF MAGIC AND MAYHEM 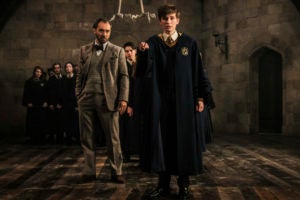 FANTASTIC BEASTS: THE CRIMES OF GRINDELWALD

It’s that time of the year for you to dust off your magic wands and hold on to your hats and glasses as we once again jump—feet first—back into the world of witches and warlocks à la Harry Potter.

Actually, it’s not another Harry Potter film but the “Fantastic Beasts: The Crimes of Grindelwald,” the second “prequel” that first magically appeared in “Fantastic Beasts and Where to Find Them” two years ago, telling the story of amazing creeping and crawling creatures that “lived” inside a world truly unlike our own.

Set in London, many decades ago, here’s the official synopsis from the first film:

“The year is 1926, and Newt Scamander (Eddie Redmayne) has just completed a global excursion to find and document an extraordinary array of magical creatures. Arriving in New York for a brief stopover, he might have come and gone without incident, were it not for a No-Maj (i.e. Muggle) named Jacob, a misplaced magical case, and the escape of some of Newt’s fantastic beasts, which could spell trouble for both the wizarding and No-Maj worlds.”

Directed by David Yates (“Harry Potter and the Order of the Phoenix”) and with a production budget of $180 million, the first “Fantastic Beasts” brought in more than $800 million in ticket sales worldwide—and guess what—the sequel, continuation or on-going story (however you call it) continues with “Fantastic Beasts: The Crimes of Grindelwald” and there are more eye-popping special affects you can shake a wand at.

Of course, all of the lead actors the first film return for this sequel (they better as all are under multi-film contracts), including Newt, his would-be gal pal Tina Goldstein (Katherine Waterston) and Dan Fogler as the loveable rotund Jacob who really stole the first film as the wide-eyed Muggle who was truly out of place.

If you recall at the end of the first “Fantastic,” the chalk-colored haired Gellert Grindelwald (Johnny Depp) was captured and was set to stand for his many magical and Muggle crimes while the sweet, loveable Jacob Kowalski had his mind wiped, forgetting everything and everyone he met.

And you think that small little plot device is going to stop writer J.K. Rowling, the creator of this marvelous magical world?

In this latest “Fantastic Beasts” tale, Newt comes face to face with a younger and very hot Albus Dumbledore (Jude Law), his former mentor and instructor, as the movie audience joins in on traveling to Hogwarts School of Witchcraft and Wizardry, a
“fictional school of magic for students aged eleven to eighteen and is the setting for the first six books in the Harry Potter series”.

So says Wikipedia … which of this sequel also states:

“In an effort to thwart Grindelwald’s plans of raising pure-blood wizards to rule over all non-magical beings, Albus Dumbledore enlists his former student Newt Scamander, who agrees to help, unaware of the dangers that lie ahead. Lines are drawn as love and loyalty are tested, even among the truest friends and family, in an increasingly divided world.”

And there you have the set-up for what is a truly amazing journey of magic and mayhem.

Dear Friends … it is near sacrilegious to say anything even remotely negative about anything that comes from the heart and mind of Ms. Rowling and this film critic will likewise tread gently. 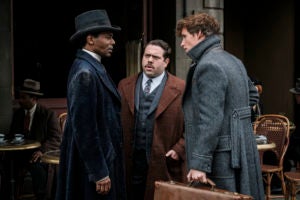 Suffice to say that Gellert Grindelwald breaks free of his magical prison by the American Ministry of Magic, and along with an equally attractive and thoroughly evil Leta Lestrange (Zoë Kravitz), Newt’s former school crush, they make a bee line for Hogwarts.

Now I must digress for a moment to say that I truly despised last year’s “Justice League,” the DC Comics mash up with Batman, Superman, Aquaman and Cyborg … and I thoroughly loathed the nerdy version of the Flash by actor Ezra Miller who sleepwalked through his performance of the fastest man alive.

Given that, Miller’s Credence Barebone in “Fantastic Beasts: The Crimes of Grindelwald” is a hoot, thoroughly redeeming himself (for the moment) from wearing that awful red and gold costume of the Scarlett Speedster.

The cast of this second “Fantastic Beasts” film is top notch and however (you knew there would be one), if you come to this film even nine minutes late, you will be terribly lost and completely in the dark.

Characters flit by at warp speed and the dialogue by Rowling is rapid fire as she thoroughly expects that you have either read all of her Happy Potter novels or watched each of the films—repeatedly. 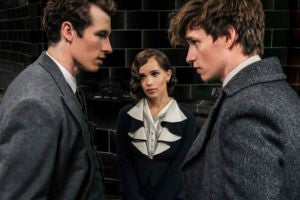 Even so, as people zip in and out, I had serious issues keeping track of who they are and how they end up in the end.

The story of “Fantastic Beasts: The Crimes of Grindelwald” is quite complex, too much is going on and it will go right over the heads of any of the teen set younger than 16.

With a run time of 134 minutes, small tykes like our five-year-old twins Nicholas and Antoinette will probably enjoy the CGI effects (which takes us to the cobblestone streets of London and Paris of the 1920s.

The presentation of this film is lavish but the story will be completely lost on any non-Harry Potter fan.

“Fantastic Beasts: The Crimes of Grindelwald” is the second of five (count em) “Fantastic” films slated to arrive for the holidays over the next decade.

Hmm, that means our three-year-old Jeff Jr. will just be old enough by the fifth and final “Fantastic” film, to figure out what in the heck is going on!