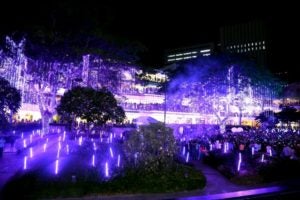 A REGULAR Mommy-and-son date with Nicholas Louis involves one-hour running and swinging at the Havaianas playground, one round of soft-serve ice cream, one serving of strawberry gelato and conversations about Disney movies and dinosaurs.

We pressed the repeat button to follow this itinerary last week (and added a meal of pad thai and citrus and herb juice at Lemon Grass) to witness as Ayala Center Cebu launched this holiday season’s Festival of Lights at the Terraces.

My wide-eyed boy was seated with Ulan and Buhawi, rockstar sons of my favorite band, Missing Filemon, by the third row of the crowd-filled outdoor venue when the Children Paradise Montessori School Choir kicked off the program. 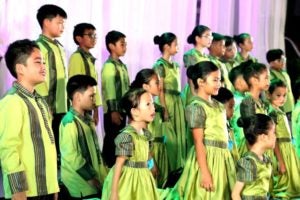 Basadours Inc. Executive Director and my dear friend, Jo Belle Marabiles, was seated to my left as the children belted one Christmas song after another.

Because our volunteer work as storytellers involved working with children and inspiring them to learn and believe in themselves, we have turned into self-confessed stage “mothers” and that was evident as we giddily clapped our hands in support of them.

Performers from Balletcenter Cebu enriched the night with a show of dance routines to the tune of Disney songs, a fine prelude to a spectacle of Disney-themed Christmas illuminations and tunes.

Ayala Land Inc. and The Walt Disney Company Philippines brought to Cebu “Reimagine the Magic: A Festival of Lights” for the fourth time, and on that night we were transported to Disneyland once more as the audio-visual display featured Disney-themed lights twinkling and dancing to Disney and Christmas songs. 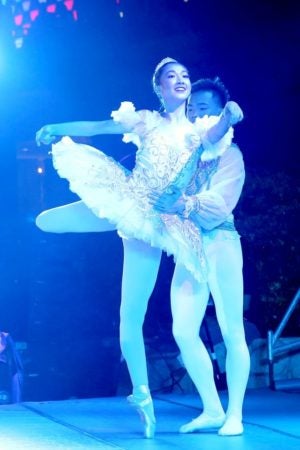 Nicholas and I did not speak for a moment, sitting side-by-side listening to familiar Disney songs that his Daddy Jeff, the original Disney fan in our family having been raised in California, introduced to us.

As lights twinkled all around us, Ayala Center Cebu gave the audience another reason to feel the Christmas vibe as Jose Mari Chan enveloped the audience under a spell of songs and stories.

He referred to Cebu as his second home sharing that his grandmother is from Bogo, northern Cebu.

I was reminded of his Cebu concert last year that was put together by Zonta Club of Cebu I, when he told the audience that Cebu is second home because he has family and friends here.

When JMC started singing “A Perfect Christmas,” the truth revealed itself among the crowd: it is official Christmas season! He sang a not-so-mainstream song, “A Child Again at Christmas,” but an equally beautiful song that reminds us to spread love and joy this season as he made a wish for a narrow gap between the rich and poor. 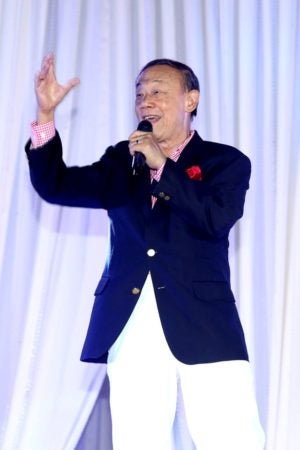 Ever generous to fans, he gave in to song requests of singing love hits such as “A Love to Last a Lifetime,” “Beautiful Girl,” “Please Be Careful with My Heart,” “Afraid for Love to Fade,” and “Refrain.”

He would have sung more if not for the rain that was threatening to expose itself on a Saturday night.

He sang one of the Filipino’s Christmas anthems, “Christmas in Our Hearts,” with the children’s choir.

I looked to my right and my son was seated beside a pregnant lady and her husband who shared their umbrella with him.

It was raining by that time but people still sang along, swayed to the music and continued taking pictures.

JMC’s 1990 holiday album also titled “Christmas in Our Hearts” is the best-selling OPM album to date.

Judging from the crowd’s reception that night, it looks like that album is going to continue bearing that honor for years to come. 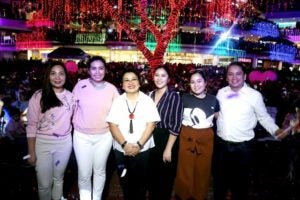 It was a long day for Nicholas but we were still full of energy that night. In the true spirit of Christmas, we sipped hot chocolate and shared chocolate chip cookies in a café. 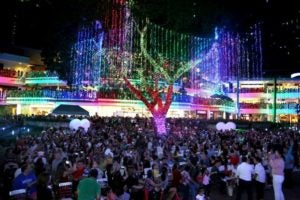 Later that night, as we headed home, we listened to “When You Wish Upon a Star,” “Beauty and the Beast,” and “Let it Go” until he told me he was tired and went off to Dreamland.