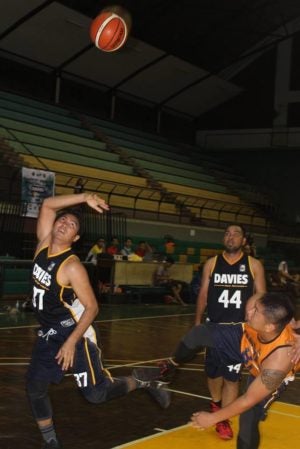 CAPTION: Ayi Armenion of Powerfloor gets fouled in a game against Bio-Fresh. Contributed photo

Mondo Skimcoat and Powerfloor zoomed to the top of the standings after they defeated their respective opponents in the second week of the 2018 Architects + Engineers Basketball Club Davies Paints Cup last Saturday at the University of San Carlos gym.
Mondo routed Liquid-Tile, 72-53, as guard Michael Judilla did it all, tallying 22 points to go with eight rebounds, four assists and two steals.
Justin Aspacio was likewise as efficient as he scored 18 points to go with four rebounds and five dimes.
Powerfloor also had a dominant outing as they blew away Bio-Fresh, 90-69.
Ayi Armenion paced the winners with 22 points and 11 rebounds while former Cesafi standout, Marlo Pono, contributed 17 points, four boards and four assists. Armand Intong and Kurt Vanguardia had 13 and 11 markers, respectively.
Both Mondo and Powerfloor hold identical 2-0 win-loss records and will face off this Saturday for the solo lead.
Megacryl, meanwhile, won over Sun & Rain, 82-77, to even their record up at 1-1.
Neilfred Bacus filled the stat sheet up, compiling 21 points along with 11 rebounds, five assists and three steals. Mark Malinao helped him out with 19 points, eight boards, three assists and four steals.
Read Next
A ‘queen’ called Marga