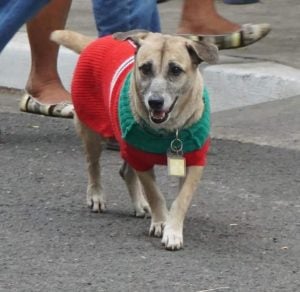 The grounds of the University of the Philippines Cebu (UP Cebu) would now be different without the school’s beloved pet — a
mongrel who walked around campus, as if she owned it, heralding her presence with the sound of tiny bells dangling from her collar.

When the 15-year-old dog left for good, the entire UP Cebu community was in mourning, with several students sharing dedications and sympathies online. 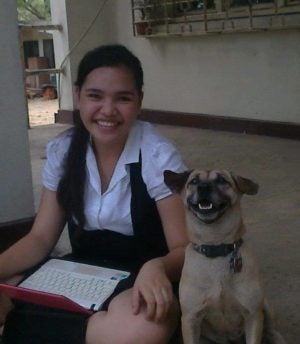 Marga beams as she poses with UP Cebu alumna Danielle Balanga.

Most showed candid photographs of the canine strolling around the campus.

Fine Arts student Jobel Diño posted an artwork of Marga wearing UP’s sablay, with the caption: “Safe passing, Marga”; while Management student Jarrah Cynth Alvarez wrote on Facebook how she will miss even those times when the dog ignored them when they tried to get her attention.

“We’ll miss the times (when) you sit by a random student, allow him/her to pat your head, and give much needed comforting.

Marga was the pet dog of Rebecca Bayawa, an administrative staff of UP Cebu.

She went viral over social media in February when a video showed her crossing Gorordo Avenue accompanied by the university’s security guard.

The dog, who looked like a cross breed between a corgi and a pug, was only a puppy when she first stepped into the life of UPians, recalled UP Cebu alumna Danielle Balanga in a post.

Covered with light brown fur, Marga was put under the care of Criza Liza Mendez , UP Cebu High School’s ‘Manang Lisa’, who sold snacks in campus.

Eventually, Marga was adopted by the university faculty and staff.

“Most of her time, Marga would accompany the security unit of UP Cebu, and technically live inside the school’s guard house,” said Balanga.

When the dog was confined last October 31 after showing signs of a bacterial infection, Bayawa kept the UP Cebu community updated on the dog’s condition through her FB account. 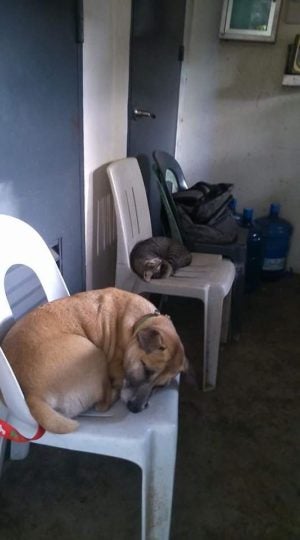 Marga curled up on a monobloc chair inside UP Cebu’s guardhouse (left photo) with her campus feline friend Meloi.

To help foot her medical bills, calls for a fund drive followed but Marga succumbed to the disease five days later.

Marga’s legacy, however, goes beyond memories of how she managed to relieve stress in UP Cebu simply through her interaction with the people she met in campus.

“Community dogs are more than stress-relievers. They, too, play a crucial role in building a community,” said Cebu City Veterinarian, Dr. Alice Utlang in an interview with Cebu Daily News.

“For cases like Marga, it is clear that she has left a positive impact on the people she has come in contact with,” Utlang added.

Utlang, herself a dog lover, stressed the importance of treating dogs, cats, and other animals with the same respect as human beings.

“There’s actually a connection between animals and human beings in an animal-loving society. One that is healthy and actually productive, and that is already proven in most cases,” said Utlang.

“It should not matter what breed or if the animals are strays. As long as we are able to show them they’re being respected and loved, they will return the same thing to you,” she said.

According to Utlang, when community pets start to feel that they belong in a world dominated by people, they become effective guardians of peace and order, too.

“They can be playful towards you at the same time, they will defend you from any harm that comes to you.

Animals have that kind of senses,” explained Utlang whose office in Cebu City’s Department of Veterinary Medicine and Fisheries (DVMF) keeps several rescued pets inside their compound at the North Reclamation Area (NRA). 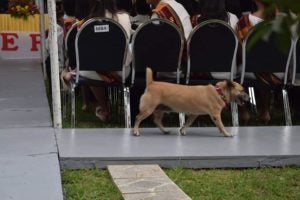 She also likes strolling around (below) as seen during one of UP Cebu’s commencement exercises.

At least six cats and 10 dogs roam DVMF’s premises. All of the animals are up for adoption.

“In stressful times like today, it has become more obvious as to why dogs are called as ‘man’s best friend’,” said Utlang.