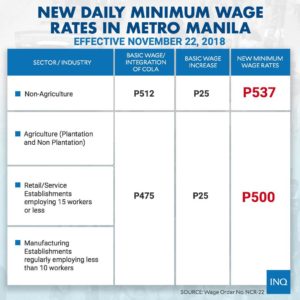 According to Wage Order No. NCR-22 published last Nov. 7, the new minimum wage rates in Metro Manila shall be P500 and P537 across different sectors.

The minimum wage of workers in the non-agriculture sector has been raised to P537.

Meanwhile, the minimum wage for those in agriculture, retail establishments, and establishments employing less than 10 workers shall already be P500.