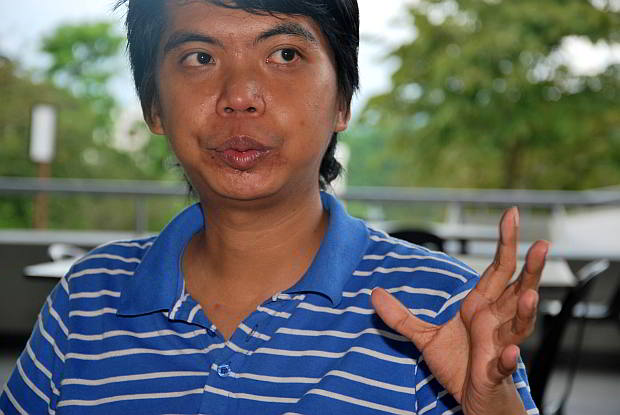 As a boy in barangay Tisa, Cebu City, Remton Zuasola would spend hours listening to radio dramas and visualizing  scenes  in every  plot.

His  fascination for storytelling led Zuasola to the world of film directing, where, even as an amateur, his work captured the attention of film reviewers.

His latest accolade was winning this year’s best director award for the  film “Ang Damgo ni Eleuteria” in the 34th Gawad Urian,  one of the highest award-giving bodies for the best Filipino films.

The recognition was all the more precious because it was something he could show his parents who had reservations he could succeed in the business.

The Urian Awards also proved that  his film crew’s hard work and perseverance paid off.

In wrapping up the film, he juggled  his regular work as  a television director for Sugbu TV, a network operated by the Cebu provincial government,  and attending film festivals outside Cebu.

Eventually, he had to choose where to focus his energies, and his  boss, Cebu Gov. Gwendolyn Garcia,  advised him to  follow his dream.

Zuasola, 27, let go of his  day job and chose the uncertain world of filmmaking.

The choice meant sacrifices—financial struggle to help his family with a mother suffering from stage 4 bone cancer.

“It came to a point na gutom na kaayo…all these accolades just came recently. But before that, it was  hard work, tears and blood, nga nagtulo sa kalisud,” Zuasola said.

Zuasola grew up in the city barangay of Tisa,  the son of a driver and a dressmaker. He was the eldest in six children.

“It started with my fascination with  radio dramas.  With radio,  it’s all audio (sound).  You have to fill in the story with visuals in your imagination. I’ve  been fascinated with storytelling ever since then,” he said.

He also joined community theater and performed with rowdy neighbors  during fiestas, honing his acting skills.

In college, he enrolled in a Bachelor of Fine Arts major in Advertising Arts at the University of San Carlos as the closest to his  to interest in  filmmaking.

The course wasn’t easy. School projects were too expensive for his parents’ meager income so he took to selling  snacks,  school supplies and even his services in making school projects for classmates.

“What really saved me was selling canvasses. We have painting subjects and we would always complain about  how expensive the canvass was being sold in the malls. So I studied how to make  canvass and  manufactured my own.  I sold it  to students at a much cheaper price.  It was a top seller,” he said with a laugh.

“The canvasses are the reason I graduated.”

After graduation, he  was hired as  TV director of Cebu 28, a local travel channel.  When it folded up, he  did freelance jobs for commercials and directed TV  shows, which  pay per shoot.

His parents  started pushing him to find a “real job” that didn’t require an artist’s sacrifice.

“It’s a dream job but they were too scared that I would end up heartbroken if I don’t realize this dream,” he said.

He moved out of the house.

“I wanted to stand on my own and prove to them that I can make a living with this kind of work,” he said.

At the start, he had no equipment and had to  borrow  expensive gear from friends.

He produced short films and submitted them for film festivals. The cash prize he  would receive would be used to fund the next film project.

In 2008 his Sinulog videodocumentary  “Sinug” won the grand prize at the  the annual Sinulog Film Festival.

Another  short film, “To Siomai with Love,” created a splash at the Cinemanila International Film Festival where it won the best short film award.

Cinemanila also recognized him as the Most Outstanding Young Filmmaker of the Year.

It was with “To Siomai with Love” that he found his personal directing style.

“I think it was because of ’To Siomai Love’ that people recognized my work. It  was there that I was born as a filmmaker. In my years of hard work, it was in 2009 when  I discovered myself. I  found my voice. It was in this film that I discovered how I love making movies and made me realize this is the profession that I am willing to die for. I cannot trade this for anything,” he said.

He also found a niche in animation. He was  recognized for  his animation “Mga Damgo” in the national short film competition by the United Nations aimed at promoting the Millennium Development Goals.

In 2010, he won  as best director with his short film “Kurtina na Pula” in another Sinulog Short Film Festival.

Zuasola said that he wrote most of his films but it was only in “Ang Damgo ni Eleuteria” that he adapted a story from a friend.

It was a story submitted for the  Cinema One film festival. Out of hundreds of entries across the Philippines,  the television station chose seven best stories for a P1-million grant to produce it.

The film was unique because it was shot in one- hour-and-a-half take, without cuts,  a technique that Zuasola had carefully studied and prepared for.

The story centers on a  mail-order bride from a remote island who spends her  last moments  with her family before she leaves  for Germany to marry a rich old man. The scenes were shot in Olango island, Lapu-lapu City.

The cast and crew had to be carefully rehearsed for the shoot.  It took about six months of pre-production.

“Our cinematographer collapsed after the shoot,” he recalled.

The work is a source of joy he can present to his family.

A few months ago, Zuasola moved back to his parents’ house after learning that his  mother was ill with  cancer.

His recent accolades have  brought them relief as well   that  the firstborn in the family had a clear future.

“I guess they don’t have second thoughts anymore about me.  They are the ones who get excited whenever I get nominated for a prize.”

“I’m so glad the recognition came because I can see  my mother happy.”

Zuasola said winning a   is  not the motivation  for  creating a great film.

“The most rewarding experience for me as a director is sitting inside a dark movie house with your audience, watching your movie together. You can hear them laugh, shout, cry and overhear side comments. That’s the ultimate experience. Seeing the audience appreciate your work is the best feeling ever,” he said.