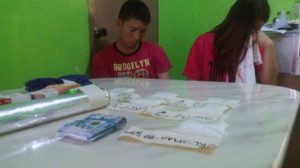 Jovanie Cabrillos (left) and his common-law wife Shiera Mae Abatayo with the P2 million worth of suspected shabu seized from them on Saturday. Cabrillos claimed that a detainee inside the Talisay City Jail is his source of illegal drugs.
CDN PHOTO/BENJIE B. TALISIC

Talisay City law enforcers are now conducting an investigation to validate the claims of a drug suspect who was arrested on Saturday morning that he got his supply of illegal drugs from an inmate inside the city’s jail facility.

A total of P2 million worth of illegal drugs were seized from two drug suspects, identified as Jovanie Cabrillos, 28, and his live-in partner Shiera Mae Abatayo, 27, in Barangay Linao, Talisay City.

The operation was conducted by the Provincial Intelligence Branch together with the Provincial Drug Enforcement Unit (PDEU) of the Cebu Provincial Police Office (CPPO), who had been monitoring the suspects’ activities for two weeks.

Senior Insp. Alejandro Batobalonos, chief of the PDEU, said they consider Cabrillos a high-value target (HVT) since he does not only peddle illegal drugs but also serve as collector of drug money for some drug personalities.

(In our monitoring, we found out that he disposes illegal drugs. But he also claimed that he serves as a collector for drug money.)

Batobalonos also said that Cabrillos admitted to collecting drug money from a certain “Boss-Amo,” who is allegedly an inmate inside the Talisay City Jail in Barangay Maghaway.

(That is also what we are thoroughly looking into if his claims are indeed true. Aside from Boss-Amo, he also told us that a certain “Siroy” was the one who invited him to join in the illegal drugs trade.)

Cabrillos and Abatayo are now detained at CCPO’s stockade pending the filing of charges against them.