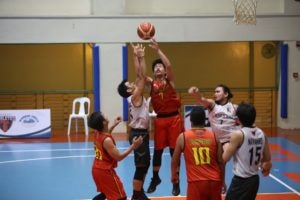 THE TECH Mahindra Mighties destroyed the Streamline Kangaroos by a massive 56-point margin, 104-48, to stay abreast of the leaders in the Evo League in the 2018 Tanduay Athletics E-Leagues for Basketball last Saturday at the City Sports Club-Cebu.

The win was the Mighties’ 10th in 14 tries, placing them in third place behind the unbeaten Dreamscape and Kyocera, which emerged victorious over Shearwater, 72-36.

Kyocera meanwhile, leaned on a balanced attack to get their 11th win in 13 games. 12 different Frontiers managed to score at least a point in the lopsided match led by Ryan Seterra’s 19 markers.

In the Elite Classic, the Teleperformance Vipers defeated the Wipro Tigers, 67-58, to remain in second place at 11-2. Germaine Guarisma and Rahne Laborte carried the fight for Teleperformance with 17 and 16 points, respectively.

The defending champions Converters meanwhile eked past the QBE Generals, 85-81, to nab their 10th victory in 14 games.

Admir Batiancila was the man of the hour for the winning side as he had 23 points, five rebounds, five assists and four steals. Jose Gonzales nearly had a double-double with 20 points and nine rebounds.