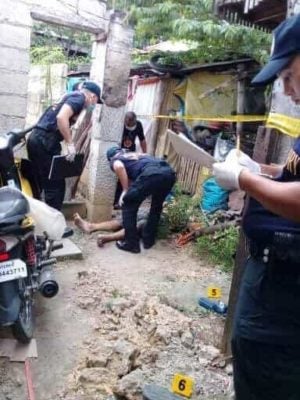 One was killed while another was arrested in a buy bust operation in Sitio Kalambre, Barangay Pulpogan, Consolacion town at around noontime on Sunday.

The casualty was identified as a certain Rasty who sustained a bullet wound below his right ear.

A second suspect identified as Tito Algadipe, 33, was arrested by the police.

Pelare said in a press release that they organized the buy bust operation against Rasty and Algadipe at about 12:30 p.m. on Sunday, but the two started to scamper after they sensed that they were selling drugs to a police poseur buyer.

However, policemen corner Rasty after a brief chase.

Pelare alleged that the suspect pulled a .380 caliber pistol and fired at the police team.

MDEU personnel fired back and hit Rasty below his right which resulted to his immediate death.

They also confiscated four small sachets and 1 medium sachet of suspected shabu, the 300 marked money, and another P5, 000 cash believed to be proceeds of their illegal drugs activity from the two suspects.