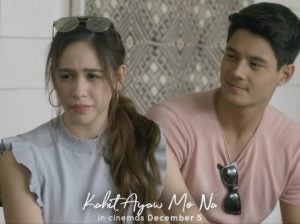 AFTER her turn as Felicidad Aguinaldo in the historical epic, “Goyo: Ang Batang Heneral,” Empress Schuck will next star in a film together with young stars Andrea Brillantes and Kristel Fulgar.

Shot in Samar, the film titled, “Kahit Ayaw Mo Na,” is about “Three strangers. One common past. One great summer to
remember.”

Based on the official trailer released by Viva Films on its YouTube channel, the story centers on a fashion designer Joey (Schuck), food and travel vlogger Mikee (Fulgar), and Ally (Brillantes), an aspiring composer. They will unexpectedly meet in Samar.

Mikee is described as a hopeless romantic vlogger.

Ally believes in herself so much and keeps on composing songs.

Joey has a different personality from Ally and Mikee. She is a strong-willed and independent woman.

She has no plans of getting married even if her boyfriend, played by Daniel Matsunaga, has proposed to her.