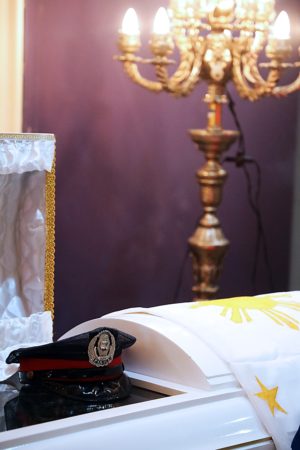 A reward for anyone who kills a police officer?

According to Cebu Provincial Police Director, Senior Supt. Manuel Abrugena, they are now validating raw information that drug personalities are offering P20,000 for the life of a police officer.

“I will be asking all our chiefs of police if these allegations are true (and to validate the information),” said Abrugena during a press conference on Wednesday.

He said they had been expecting drug personalities to retaliate following their intensified campaign against illegal drugs.

“We have incidents na target of operations natin is high on drugs and then talaga po nakikipaglaban. One example is ito nga pong last na pangyayari sa Talisay wherein ating isang personnel was shot on his chest (when conducting a surveillance). Nagkataon lang na nakapagtago and luckily hindi naging fatal ang tama,” said Abrugena.
(We have incidents that the target of our operations is high on drugs and then they really fight back. One example is the incident in Talisay City where one of our personnel was shot in his chest when conducting a surveillance. It was lucky that our police officer was able to hide and it was not a fatal gunshot wound.)

Intent to kill
Last Nov. 23, PO1 Jaylord Joseph Taping was hit in his chest while conducting surveillance on a drug suspect in Sitio Mananga in Barangay Tabunok, Talisay City.

The police officer was part of a surveillance team that was gathering information against a certain Ronaldo Valdez and three of his cohorts, who are allegedly drug pushers.

Valdez allegedly sensed the policemen doing the surveillance and fired at them.

Because Taping was hit in the chest, Abrugena said it only meant that they intended to kill him.

“The suspects really have the intent to kill our policemen,” said Abrugena.

He said the information they received was that drug personalities would contribute money to pay a hitman.
“Allegedly P20,000 (per police officer killed),” added Abrugena.

“About a month ago pa yung mga threats (that we received),” said Conag in a text message to CDN.

He said that even the police detailed in Barangay Tanke, which is considered a heavily infested drug area, also received death threats.

“Ganyan talaga. It means we are doing our job and (these) drug lords cannot penetrate our police force,” said Conag.

Paralyzed?
The CPPO has intensified its campaign against illegal drugs and has been conducting buy-bust operations almost every day.

In Talisay City, there have already been nine individuals killed in an alleged shootout with the police operatives during operations.

The recent fatality is Eugene Cabando of Barangay San Roque.

Police officers claimed that Cabando sensed that he was dealing with a police, which allegedly led to a shootout.

The police recovered a .38 caliber revolver and 34 small packs of suspected shabu.

According to the Talisay City police, Cabando was also a cohort of the suspected drug pushers being monitored at the place where Taping was shot.

Abrugena believed that the drug operations of these drug groups in the province are already paralyzed because of their intensified operations.

Abrugena directed his personnel to be more vigilant and take extra precautions after receiving these information.

“Lage sinasabi sa kapulisan in every operation they will be making dapat lang talaga mag-ingat. Because we can never know kung ano yung mga plano ng mga lawless elements dito sa ating probinsya,” he said.
(We keep reminding our policemen to be very careful during operations because we will never know the plans of these lawless elements in our province.)