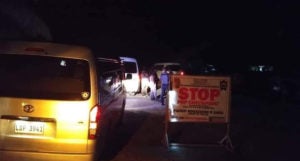 Meggie Nolasco, executive director of Salugpongan community schools, said that as of 5 a.m. Thursday, 75 people, including 29 students and 12 teachers of Lumad schools in Davao del Norte, were “illegally arrested” by the joint forces of the Talaingod police and the 56th Infantry Battalion (IB) of the Philippine Army (PA), who also had with them officials of the Talaingod municipal social work and development office (MSWDO).

Nolasco said those arrested were in a convoy of five vehicles who went to Talaingod town on Wednesday to deliver food supplies and rescue children from a Talaingod Lumad school recently padlocked by the paramilitary group Alamara.

Aside from Ocampo, the group also included ACT Teachers party-list Rep. France Castro, and Pia Malayao of Katribu, among others.

“We condemn this move of the military. Clearly this is a form of harassment mean to delay the delivery of goods and services in the lumad community school,” Nolasco told the Inquirer by phone.

Meanwhile, the House Makabayan bloc denounced Thursday the alleged harassment and illegal detention against the delegates of the solidarity mission in Talaingod town.

The National Solidarity Mission (NSM) is composed of a delegation of 74 people including 24 students and 12 teachers of Lumad schools in Davao del Norte. They were there to give relief to the students and teachers who were “victimized by the threats, harassments and the eventual forcible closure of their schools by the paramilitary group Alamara under the 56th Infantry Battalion.”

Read Next
Galvez: Duterte says no Martial Law in Luzon and Visayas