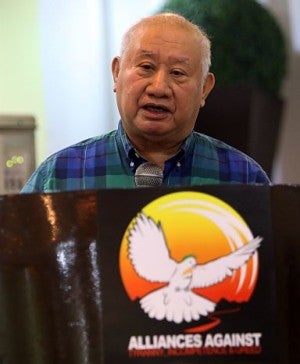 Human rights advocate, retired Judge Meinrado Paredes of the Samahang Demokratiko at Kaakbay (SDK) condemned the plan to form ‘death squads’ to counter the sparrow units of the insurgents.

“Two wrongs can not make a right,” said Paredes.

President Rodrigo Duterte bared his plans of creating a Duterte Death Squad to counter the Sparrow unit of the New People’s Army.

Paredes said that the Duterte Death Squad will be more dangerous than the “Davao Death Squad,” a vigilante group in Davao City allegedly responsible for summary executions.

“This (Duterte Death Squad) won’t discriminate, including political opponents, critics to the administration, and those who are against the Duterte regime, patyon nila (they will kill),” said Paredes.

Paredes said insurgents deserve to be treated with the basic human right of life and may only be killed during armed combat.

Paredes said the AFP should treat insurgents humanely by arresting them and giving them a chance to be tried under the law.

Forming a “Duterte Death Squad” as a counter force to the Sparrow unit of the New People’s Army would need to be assessed and studied.

“We are conducting assessments (on the Duterte Death Squad) so we will know (what to act). On our part, when we interpret it, it means more vigilance and to counter some complacencies in doing administrative missions,” Armed Forces Chief of Staff, General Carlito Galvez Jr. told the media during the 17th anniversary of the Central Command in Camp Lapu-Lapu in Cebu City.

He was hesitant to give his own views about the Duterte Death Squad to counter the NPA Sparrow unit and only said that the AFP does not have a “death squad”.

“We capture them or neutralize them through our intelligence operations,” Galvez added.

Galvez said that he treats the statements of the President regarding the counter-sparrow units as a form of warning to the AFP for them to improve their tactics in neutralizing the insurgents and to better their intelligence.

“We have the directive to heighten up the vigilance and duty consciousness of the AFP units, to intensify intelligence operations, and to neutralize the sparrow units of the communists,” said Galvez.

The President said that the Duterte Death Squad would be composed of armed civilians who were not from the community and would be posted in public places like transport terminals.

“They will loiter at the terminals,” he said.

According to the President, the death squads would be an advantage in his war on rebels.

The hit squads, he added, could also go after drug suspects “ since it is a national security matter.”

“One of these days I’ll be forced to create my own Sparrow (Unit) … I will match their talent in assassinating people. Yun ang balak ko (That is my plan),” Duterte said in his speech during the turnover of housing units for the military and police at Camp Rajah Sikatuna in Carmen, Bohol last Nov. 28.

(What is missing is my own sparrow unit. That is their advantage. So I am going to create my own sparrow, the Duterte Death Squad, against the (NPA) sparrow.)

Philippine National Police (PNP) Director General Oscar Albayalde on Wednesday, said, any member of a “hit squad” would have to undergo processing by the PNP.

“Hindi naman ‘yung sinabi niya na aarmasan niya basta-basta ‘yung mga (sibilyan). Those who are qualified to handle firearms and to be owners of licensed firearms (will only be allowed),” Albayalde said.

He also said the firearms should also be licensed and the civilians should have permits to carry guns.

Meanwhile Police Regional Director, Chief Supt. Debold Sinas said he is waiting for guidance from the PNP national headquarters regarding the death squads.

“We will just wait for the announcements. The impact of that will be determined by the national headquarters,” said Sinas.

As if to placate critics, Malacañang said on Thursday (November 29) that the President’s plan to form the hit-squad was simply an “idea.”

“I think the President was just bringing an idea, and if that idea becomes a reality, as Secretary of Defense Delfin Lorenzana said, the Army will be in charge of that,” Presidential Spokesperson Salvador Panelo said in a Palace briefing.

Asked if this will endanger the lives of surrenderers, Panelo said their lives were already in danger the moment they laid down their arms and surrendered to the government.