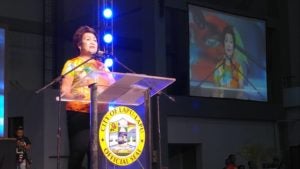 PROPER waste segregation and disposal and other best eco-friendly practices at the household level were reiterated during yesterday’s launching of the “Go Green” program of Lapu-Lapu City Hall.

In a speech, Regional Director William Cuñado of the Environment Management Bureau (EMB-7) said the program is not only confined to cleaning up streets but also instilling eco-friendly best practices among households in Lapu-Lapu City.

“Active citizenship can be as small as a campaign to clean up your streets or as big as educating young people about values, skills, and participation,” Cuñado said during yesterday’s program launching at Lapu-Lapu City’s Hoops Dome.

Cuñado said convincing the public to adopt a mindset and consistently implement best solid waste management practices remains a challenge for every household.

“A long-standing view of nearly the entire populace is that they are responsible for keeping their home clean, but their immediate environment and public places, like streets and drainage, are the responsibility of the city or town,” he said.

These attitudes lead to a lack of respect for rules of socially responsible behavior, Cuñado said.

Lapu-Lapu City Mayor Paz Radaza asked constituents to be committed to the project to help sustain the city’s tourism image.

“What we have, what our City is blessed with, gives us the reasons to protect and preserve it,” she said.

Read Next
‘Prepare selves for prayers, not parties’