Music that tugs the heart 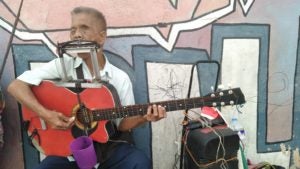 STREETSIDE ENTERTAINMENT. Despite his blindness, Guillermo Martinet can play his instruments like a seasoned veteran.  CDN PHOTO/JESSA SOTTO

It was a Sunday afternoon when passersby caught a glimpse of a blind man playing with an old guitar and a harmonica all at once.

Along Zamora and S.B. Cabahug street in Barangay Centro, Mandaue City, 74-year-old Guillermo Martinet sat at a corner with his wife while playing the two instruments at the same time.

Guillermo, though wrinkled and grey, looked dapper in a crisp blue polo shirt and pants as he ran his fingers through his guitar and blew into the harmonica that was mounted on a makeshift metal bracket that rested snuggly near his mouth.

On weekdays, the blind musician could be found playing in Cebu City’s downtown area at the crowded Colon Street.

Guillermo, a resident of Taboan, Cebu City, has lived with his blindness for the past 70 years.

His wife, Solidad, said that it was the high fever which struck him when he was only four years old that caused Guillermo to go blind.

According to Solidad, Guillermo was not immediately attended to at the hospital because her husband’s family was poor.

Because Guillermo feared living in the dark, Solidad said he found solace in music which brought light into what would have been an otherwise bleak childhood.

“Gitudloan siya sa Amerikano moguitara kay nalooy niya (An American taught him how to play the guitar because he pitied him),” said Solidad.

Neglected by his parents, Guillermo was unable to go to school. Today, he could neither read nor write.

To support his needs, Solidad said, Guillermo begged in the streets for money before; but he later realized that playing the music he loved could be his tool to earn a better living.

Guillermo then took to the streets again; but this time, lugging his guitar, a harmonica and a rusty loudspeaker to play old favorites and his original compositions for passersby.

On Sundays, for about 44 years now, Solidad takes her husband’s hand to bring him to a spot just between the National Shrine of St. Joseph and the Mandaue City public market.

Unbeknownst to many, Guillermo could barely hear his music as age has somehow dulled his ears. 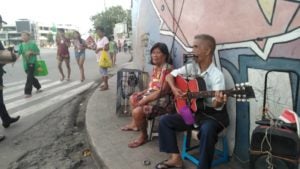 Guillermo Martinet plays his guitar and harmonica while his wife
Solidad stays at his side to attract passersby into sharing their blessings with them.

His wife, 74-year-old Solidad, literally serves as his eyes and ears.

She prods him when the mass at the nearby church has ended so that he could start performing for the people passing by.

The audio speaker, connected to his instruments, blares his music across the street as people stop momentarily to watch him play.

Some drop their donations, mostly coins, into a plastic container hanging beneath the blind man.

“Makakaon man mi ani kay naay malooy pud (Because of this, we are able to eat because there are those that feel sorry for us),” said Solidad.

Still, Guillermo’s earnings are barely enough to meet all their needs as the Martinets also have to buy medicines, regularly, for his hypertension.

Although they have no children, Guillermo and Solidad have taken in a 14-year-old boy whom they consider as their own.

With the holidays just around the corner, Solidad has one simple wish to make their Christmas merry— a hearing aid for Guillermo.

Though her husband’s sight could no longer be restored, Solidad hopes that he could, at least, hear again.