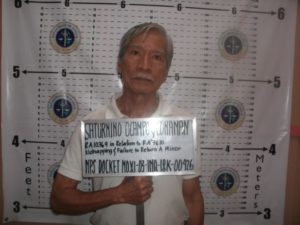 Former lawmaker Satur Ocampo poses for a mugshot after he and 17 others were arrested for allegedly trafficking and kidnapping minors in Davao del Norte. POLICE PHOTO

Former Bayan Muna Rep. Satur Ocampo on Monday denied recruiting minors to join communist rebels, adding that it was against the rule of the Communist Party of the Philippines and the New People’s Army (CPP-NPA).

“There is a rule in the CPP-NPA against recruitment of minors. So, definitely, that could not be a part of the program of the NPA,” Ocampo said in an interview over ABS CBN News Channel.

Ocampo and 17 other leaders of militant groups and volunteer “lumad” (indigenous people) teachers were detained last Wednesday over alleged human trafficking and kidnapping of students at a lumad school in a village of Talaingod town in Davao Del Norte.

He, however, did not deny the presence of the NPA in the area and that there were lumads who joined the NPA.

“The communities of the lumads are in the hinterlands so they become battle ground areas. It is not surprising that the NPA [organizes] the people in the struggle for their own welfare,” Ocampo said.

“So, it doesn’t deny that there are lumads who joined the NPA but they are not minors,” he added.

Ocampo also said he was no longer part of the CPP-NPA, maintaining that his actions were independent.

Asked if he still had a role in the CPP-NPA, Ocampo said, “No.”

“It’s a rule that after a long imprisonment or once a supposed suspected leader of the CPP-NPA is arrested, he loses all the titles and the duties in the revolutionary movement,” Ocampo said.

Ocampo said that even though he had the choice to go back, he opted to “stay above ground and to join the open legal protest mass movement and organized the Bayan Muna party-list in 1999.”

“All my activities are above ground until now,” he said.

“I have been invited as an independent cooperator in the peace negotiations but that does not make me a generic part of the National Democratic Front of the Philippines. I maintain my independent actions,” he said.

“As far as I know, I don’t know of an instance where a different version of the national anthem is taught in lumad schools,” he said.

He challenged Albayalde to provide evidence to support his claim.

“I don’t know General Albayalde’s source. He has to produce evidence. That would be a ground,” he said.

Read Next
AFP to recommend extension of martial law in Mindanao