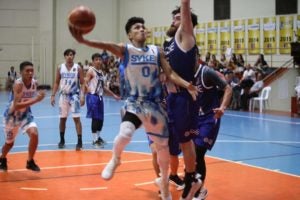 The Sykes Pioneers have now grabbed third place in the standings of the Elite Classic division. /Contributed photo

THE Sykes Pioneers defeated the three-time defending champions Converters, 71-62, to gain third place in the standings of the Elite Classic Division of the Tanduay Athletics E-League for Basketball last Saturday at the City Sports Club-Cebu.

The win, Sykes’ sixth in a row, gave the Pioneers an 11-3 win-loss record as it tries to keep in step with the league-leading Accenture and Teleperformance, which also won their games last Saturday.

Meanwhile, Accenture improved to 15-1 with a 92-74 win over the Telstra Boomerangs.

In the EVO League, the Kyocera Frontiers boosted their record to 12-2 without breaking a sweat following a default win over the Bombardier Grey Wolves.

Read Next
Duterte admits using marijuana to keep him awake