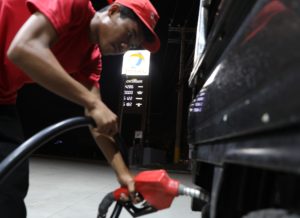 Despite another rollback in the prices of fuel, the Department of Trade and Industry in Central Visayas (DTI-7) says that the impact on the fuel price cuts has yet to be felt in the prices of basic commodities. (CDN PHOTO/TONEE DESPOJO)

Palace supportive of recommendation to proceed with second round of excise tax on oil amid drop in fuel prices; Not so fast, warns Cebu Business Club

Prices of fuel have gone down in eight straight weeks.

Based on the monitoring by the Department of Energy, the prices of diesel were now from P36.55 to P41.09 a liter after following a cut of P2.10 per liter starting on Tuesday.

The current price crash has shaved off a total of P10.55 on diesel prices and P11.85 on gasoline prices.

But the fuel prices might not stay low for long.

Malacañang was supportive of the decision of the government’s economic managers to push through with the second tranche of fuel excise tax hikes in January 2019.

For the second tranche, the Tax Reform for Acceleration and Inclusion (TRAIN) Act imposes an additional P2.24 a liter for both diesel and gasoline — P2 in excise plus 24 centavos in value added tax.

The first tranche was implemented in January 2018 which added P2.97 per liter in taxes to gasoline prices and P2.80 per liter to diesel prices.

But a local business leader said government should suspend the second tranche of fuel tax increase since there was no assurance that the prices of fuel would remain this low.

“Provisions should be made to cap the increase or to reduce the tax if oil prices increase,” said Gordon Alan “Dondi” Joseph, Cebu Business Club president, in a phone interview on Monday.

The new round of fuel price rollbacks did not also convince a transport group in Cebu to withdraw their petition to increase the minimum fare of public utility jeepneys.

“The price rollback was only imposed in petroleum products. How about the other commodities such as rice, spare parts among others? In fact, businessmen are still reasoning out that the price on fuel remains high that’s why they are selling their products at much higher (prices),” said Armamento, national vice president of the National Confederation of Transport-workers Union (NCTU).

Balacjoda earlier asked the Land Transportation Franchising Regulatory Board in Central Visayas (LTFRB-7) to increase the minimum fare of PUJs by P2.50 from P6.50 to P9.

The petition was already approved in the regional level and was now pending at the LTFRB central office.

Eduardo Montealto Jr., LTFRB-7 director, said their central office had yet to decide on the petition.

“They (LTFRB central office) said that they still need to evaluate the petition due to the series of rollbacks on oil prices,” Montealdo said.

Montealto said he was happy that the Cebu Provincial Bus Operators Association (CPBOA) would no longer ask for a fare adjustment.

The CPBOA asked for a P4-increase in the current rate of P6 for the first five km and an additional 30 centavo-hike on the existing P1.20 for every succeeding km.

“They don’t need to withdraw their petition. They just have to let it pass the reglementary period by not doing any action so that we can dismiss the petition,” he said.

Montealto said the group still lacked somesupporting documents that they needed to submit to the agency.

The series of oil price rollbacks didn’t also have an impact yet on prices of basic commodities, according to the Department of Trade and Industry in Central Visayas (DTI-7).

“We have also to consider the price of the raw materials, especially if it’s imported, while the value of the peso continues to depreciate,” Oro said.

She added that packaging materials, tin cans and raw meat are mostly imported by manufacturers from other countries.
Currently, DTI was still using the suggested retail price (SRP) issued on Sept. 1 and Oct. 13, for the basic commodities and Noche Buena products.

“Maybe if the prices of fuel will continue to rollback or maintain it longer in the next three months, we might already feel the effect,” she added.

She said consumers might just be buying old stocks since the inventory would usually last for one to three months.

And fuel prices might just go up next month.

The government’s economic managers backpedaled from their earlier recommendation to suspend the fuel excise hike by January 2019 amid rising inflation.

In a joint statement, Finance Secretary Carlos Dominguez III, Budget Secretary Benjamin Diokno and Economic Secretary Ernesto Pernia recommended the continuation of the next round of oil tax increase in 2019, citing the drop in world crude prices.

Although President Duterte had not yet expressed his views on their recommendation, it was expected to be tackled in the Cabinet meeting on Tuesday.

“They are competent and able to explain themselves to the lawmakers,” he said in a press briefing in Manila on Monday.

But Sen. Sherwin Gatchalian, chair of the Senate economic affairs panel, has said the Senate could take extreme measures to compel the executive branch to suspend the looming P2-per-liter increase in excise on oil products next year.

Gatchalian warned that the passage of the 2019 budget may be delayed if the economic managers pushed through with their plan to proceed with the next round of oil tax increase.

While Panelo acknowledged the “passage of the budget would again depend on the call of members of Congress,” he noted that Gatchalian was only one of the 24 senators.

“You are only referring to one particular senator and there are 24 senators. His opinion or observation may not be shared by the 23 others,” he said.

Joseph, for his part, said the economic managers should not make a mistake again by imposing another round of taxes on fuel.

“Our economic managers have made mistakes in the past. I really hope they are not making another one. Unfortunately, they seem to be assuming that the price of oil will continue to go down or never increase,” said Joseph.

Businessman Antonio Chiu, Cebu Chamber of Commerce and Industry (CCCI) president, said the government may impose the second tranche if the oil prices would continue to go down.

“The price of oil has gone down below $60 as of last Friday and is now at $62 today. In order to support the programs of the government, I believe excise taxes should be imposed at this level. In fact the law should be amended to allow the DOF (Department of Finance) to move faster to collect more taxes if oil prices go even lower,” Chiu said in a phone interview.

“For example, there was a time in the mid 2015 when oil prices dropped below $40 for about 3 months. Did the public benefit from it? On the other hand if prices rise again to the level of $75-$80, the government should reduce or stop collecting excise taxes on oil. It should be allowed to act faster and not wait for the average price of 3 months to cause it to act,” he said. /with Inquirer

Read Next
Firecracker vendors told: Comply with requirements before selling at SRP zone