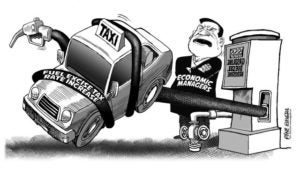 With the national government confirming its plan to impose a second tranche of fuel excise taxes next month as part of its so-called Tax Reform for Acceleration and Inclusion (TRAIN), a plan to set up a fare rate system for public utility vehicles (PUV) is starting to look like an attractive proposal.

Whether or not this fare rate restructuring system which would determine the fare rates to be raised or lowered based on current fuel prices would be affected by the second round of fuel excise taxes remains unclear though commuters are advised to brace for the worst that’s yet to come under this administration.

That business leaders in Cebu have cautioned, nay even appealed to the national government not to proceed with the fuel excise tax rate increase based on the recommendation of its economic managers — who are either out of touch or simply don’t care about the weight of the increases they impose on the common tao — says much about how the country’s economicsituation  has worsened under the incumbent leadership which is obsessed with its war on illegal drugs to the exclusion of everything else.

That said, public sentiment which also includes the mass transport groups have yet to be assessed by the Land Transportation Franchising and Regulatory Board (LTFRB) and the Department of Transportation (DOTR).

To be sure, this fare rate adjustment system is not a formula for a cure-all on the country’s transport fare rate problems and it has yet to be seen if the mass transport operators can adjust their rates accordingly.

But in order to sell this system, the government should first suspend indefinitely (if that is at all possible), if not cancel outright the planned tranche for fuel excise taxes.

As of now, the public has yet to see for themselves the benefits reaped from the additional revenue supposedly generated under the TRAIN law.

Most if not all projects that were either completed or are nearing completion have been prepared by the previous Aquino administration which relied on partnership with the private sector and not additional taxes to fund these initiatives.

More likely, the bulk of the additional taxes to be imposed on the taxpayers will fund the additional salaries of soldiers and police and the existing dole outs for the indigents.

For once, the Duterte administration should listen to its constituents and suspend or cancel the second tranche of fuel excise taxes while setting up an equitable fare rate adjustment system that will result in fare rates that is advantageous to both operators and the riding public.

Read Next
Easterlies to bring rains to Visayas