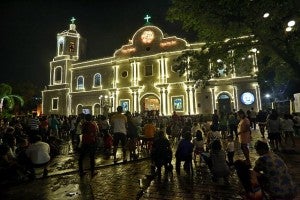 CEBU CITY, Philippines – The Cebu City Transportation Office (CCTO) will deploy at least four traffic enforcers near churches during the Misa de Gallo that will start on December 16.

Francisco Ouano, CCTO operations officer, said that enforcers will make sure that roads leading to churches will remain unobstructed to ensure the smooth flow of traffic in these areas.

Special attention will be given to bigger churches located in Barangays Capitol Site, Guadalupe, Pardo and Talamban.

Ouano is also urging churchgoers to make sure that they park only in designated parking areas.

“We’re urging the public to park their cars in designated parking areas in order to avoid (from causing) traffic (congestion near churches),” said Ouano.

Meanwhile, City Councilor Dave Tumulak is asking Cebuanos to fix the locks of their homes before dawn Masses start to avoid from falling prey to thieves.

“Keep your houses locked, and don’t be too complacent in your surroundings,” he added.