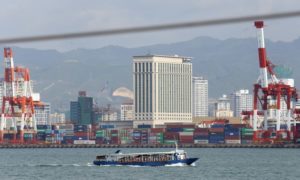 Rose Garcia, vice president of the PISFA Cebu Chapter, cites port limitations as one of the factors why the Philippines, particularly Cebu has the highest cost of logistics in the Asian region.

According to the Philippine International Seafreight Forwarders Association Inc.,(PISFA) logistic costs in the Philippines remain to be one of the highest in Asia because of these concerns.

“Our roads are very small and traffic is getting worse. Before, our trucks can move a number of containers a day. But because of traffic, they can only do one delivery a day. That will add up on top of the cost,” said Rose Garcia, vice president of the PISFA Cebu Chapter.

In comparison, other countries have much better public infrastructure which help facilitate the transport of goods.

Garcia said that the existing Cebu International Port only had a small area and that vessels could not dock on time.

This adds to the cost for logistics, as well.

The PISFA-Cebu officials statements reflect results of a policy brief made by the International Finance Corp. (IFC), a member of the World Bank Group.

The brief showed that the Philippines had the highest logistics cost compared to three other Southeast Asian countries which were included in the survey.

The IFC showed that cost of logistics in the Philippines ate up 27.16 percent of sales on average.

This is the highest cost to sales ratio compared to the three other countries.

Indonesia followed with 21.4 percent and Vietnam with 16.3 percent.

Thailand registered the lowest at 11.11 percent.

For the Philippines, the survey covered about 159 companies in major cities such as Clark, Cebu, General Santos and those in Metro Manila.

These companies are mostly small and medium-size enterprises.

In Cebu, another concern for forwarders is the container imbalance in the international port.

Garcia said that currently, there had been a surge of importation in Cebu where more containers were coming in from other Southeast Asian countries into Cebu and other parts of the country.

On a monthly average, she said, 75 percent of the containers in the port were from importation.

The remaining 25 percent are for export.

“As a result, shipping lines will have to cover for the cost because the containers cannot get out. Since there are more importations, some of these containers will be stranded in the port for up to three months,” she said.

While these concerns — traffic and the port situation — could not be addressed right away, Garcia said there could be steps that local companies could undertake to cope with the high logistics cost in the country.

For one, she said, companies should be educated that they should be the ones to choose which shipping lines they would use to ship some of their orders from abroad into Cebu.

“It should be the importer who would choose the carrier. What’s happening now is the supplier would usually decide. But with this, there are destination charges,” said Garcia who is also the managing director of the CFS Container Freight Services Inc.

The policy brief made by the IFC was submitted to the Department of Trade and Industry (DTI).

The results of the survey gave the government, for the first time, an initial baseline assessment of the local logistics landscape.

When sought for comment, Mandaue Chamber of Commerce and Industry (MCCI) President Stanley Go agreed that cost of logistics in the Philippines had been very high.

For companies who have to move their goods, it is really costly especially in the Visayas where provinces are divided by the seas.

“To move goods, you have to use boats or barges, which is already a challenge. In Luzon and Mindanao, you can do it by land,” Go said.

Go, who is also the the vice president for sales and marketing of Virginia Foods Inc., said that generally, sea freight costs in the Philippines had already been quite expensive.

“Sometimes, it would be cheaper for me to ship from Dubai to Cebu than from Manila to Cebu,” he said.

And like Garcia, Go also cited the problem of traffic as a factor for increase in logistics costs.

He said trucks would lose productivity since they would only be able to deliver lesser goods in a day compared to when they would not be stuck in traffic.

Asked what can be done to address this, Go pins his hopes on the massive infrastructure projects being planned by the current administration for the Visayas.

These include the construction of bridges that connect the different islands in the Visayas.