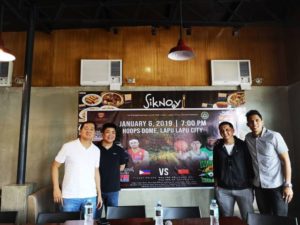 Even if China’s Wolf Warriors have the worst record in the ongoing Asean Basketball League (ABL), San Miguel Alab Pilipinas head coach Jimmy Alapag isn’t taking any chances when both teams collide in a game at the Hoops Dome in Lapu-Lapu City, Cebu on January 6, 2019.

The Warriors have an 0-7 win-loss record while the defending champion Alab have a 1-0 card but Alapag would want to make sure an upset won’t happen in the league’s first game in Cebu.

“I was quite familiar with the imports they had but they changed all of them. So, I have some more homework to do in time for that game,” said Alapag, who was in Cebu to promote the Alab’s game versus the Warriors.

Alab, which still has several games scheduled prior to the Cebu game, is coming off a 94-67 demolition of the CLS Knights, a win made even more impressive by the fact that they were able to keep their opponent’s world imports in check.

“For us to hold them to 67 points is really impressive. I’m impressed more with the effort defensively,” Alapag said.

With 7-foot-3 center PJ Ramos manning the middle and forward Renaldo Balkman doing it all, Alapag said there’s just a different dynamic to this year’s team even with just two world imports, one less than what the league actually allows.

“And the reason why we just have two imports is that we believe so much in the local talent that we have.”

Still, Alapag and Dy are not shutting the door on a return by last year’s import Justin Brownlee, who last played with Ginebra San Miguel in the PBA Governor’s Cup.

“Right now, Justin is resting. It’s been a long year for him so pahinga siya muna. I’m aware that there are other opportunities being offered to him abroad but his heart is with the Philippines. Right now, he just wants to spend time with his family and kids,” remarked Alapag.

Meanwhile, Alapag believes former Alab star Ray Parks will have an “immediate impact” on whatever team he gets picked to in the upcoming Gatorade PBA Draft.

With Parks finishing the ABL season first before he suits up in the PBA, Alapag assured that the wait would be worth it for the team that picks the 6-foot-4 guard.

“Whichever team that is smart enough to get him, he will have an immediate impact on that team,” said the man known as the “Mighty Mouse.”