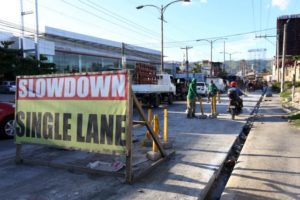 ROAD REPAIR MORATORIUM. Road projects in Cebu City including repairs in the Mambaling Access Road and drainage works at the Pope John Paul II Ave. will be temporarily stopped starting December 15 in anticipation of the Christmas rush and the Sinulog festivities.
CDN PHOTO/ JUNJIE MENDOZA

Cebu City commuters and motorists can expect a slight improvement on the city’s traffic condition once the moratorium on all road projects will be implemented starting this Sunday (Dec. 16).

This is because once the suspension will be implemented, all heavy equipment will be pulled out from the streets and all roads will be fully opened for traffic.

On Monday, the Cebu City Transportation Office (CCTO) announced that all civil works of road and drainage projects in the city, except the Mambaling underpass in N. Bacalso Avenue, will be suspended.

CCTO Operations Officer Francisco Ouano told Cebu Daily News over the phone on Tuesday that the suspension is only appropriate to give way for the Christmas and Sinulog rush.

The Department of Public Works and Highways in Central Visayas (DPWH-7) has made the recommendation to suspend road projects to prevent traffic congestion during the traffic coordination meeting of all local government units (LGUs) in Metro Cebu on Monday, December 11.

There are five road rehabilitation and drainage improvement projects being undertaken by DPWH in Cebu City.

Presently, heavy traffic is reported in Pope John Paul II Avenue in Barangay Kasambagan, and F. Vestil Street in Barangay Mambaling because both streets only have one serviceable lane due to ongoing road works there.

DPWH-7 earlier said their recommendation to temporarily halt all road projects in Cebu City would be evaluated further by their counterpart in Cebu City’s District Engineering Office (DPWH-Cebu City).

But according to Ouano, further approval from DPWH-Cebu City is no longer necessary since the moratorium is covered by a city ordinance.

The suspended projects will resume on January 21, 2019 or immediately after the Sinulog weekend.