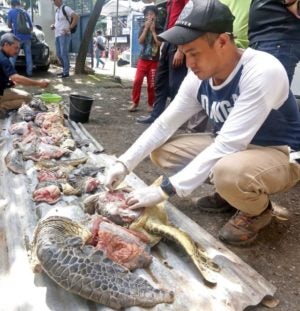 SEA TURTLE MEAT CONFISCATED BY NBI/DEC.11,2018:About 50 kilos of green sea turtle or pawikan meat were confiscated in an entrapment operation conducted by the NBI-7 and the DENR-7 along Rallos St., Barangay Pasil, Cebu City.(CDN PHOTO/LITO TECSON)

An adult green sea turtle had once escaped death when it was rescued by the Sandakan, Malaysia Environment Protection department, based on the tag found on its body.

But the endangered turtle, which supposedly traveled more than 600 nautical miles from Malaysia to the waters off Cebu island, was no match to the profit-hungry traders at the Pasil fish market, who butchered the helpless creature along with other green sea turtles, locally known as pawikan, for their meat.

The National Bureau of Investigation Central Visayas Regional Office (NBI Cevro), Department of Environment and Natural Resources (DENR-7) and the Cebu City government, confiscated on Tuesday about 60 kilograms of pawikan meat, including that of the Malaysia-tagged green sea turtle, from an eatery at Rallos Street, Barangay Pasil.

“One of the pawikans was already rescued and rehabilitated in Malaysia.The tag came from Sandakan, Malaysia. This species is migratory so when it came to Cebu perhaps, it was captured and killed,” said DENR Senior Ecosystem Management Officer Rogelio Demelletes Jr.

Five persons were arrested in the operation, including a lady-cashier, a female cook and three male helpers.

The suspects refused to issue any statements to the media or divulge to authorities their source of pawikan meat.

According to Demelletes, Cebu City, particularly Barangay Pasil, has been a noted site for illegal trade of wildlife meat and dishes.

“It is common knowledge to people that here in Pasil, there are those who sell pawikan meat. It’s called “power.” Even if you look at Google Earth, they have a map that points at Pasil with the term “Power” on it,” Demelletes said. 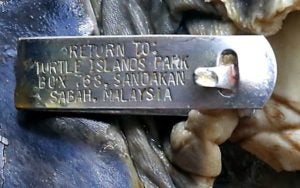 A tag was found on one of five green sea turtles or pawikan that were slaughtered for their meat in Barangay Pasil, Cebu City. The tag read “Return to: Turtle Islands Park Box 768, Sandakan Sabah, Malaysia.” Almost 60 kilos of turtle meat were confiscated and five persons were arrested on Tuesday.
CDN PHOTOS/ LITO TECSON

Pawikan meat made into a local dish called “larang” can be availed at roadside eateries in Barangay Pasil through the code “power” because it is supposed to increase sexual power.

“Power” is being sold at the eatery for P90 per serving, more expensive than the regular larang made of fish which only costs P75 per serving.

“It is a shame because a lot of people really patronize eating this dish, not only public persons but also government employees,” said Demelletes.
Demelletes said the those who buy or eat the pawikan dish may also be held liable because “nobody will sell if there is no one who will buy it.”

The operatives who conducted the raid however, did not arrest the diners who started fleeing when they saw the NBI agents approaching the eatery.

Lawyer Habeas Corpuz, NBI Environmental Crime Division (ECD) Agent on the case, said they have received an intelligence report that the illegal wildlife trade has been rampant in the said barangay.

DENR and NBI ECD conducted a test buy of raw pawikan meat over a month ago to verify if the meat being used in their dish is really that of sea turtles.

“Normally, they do not sell raw meat. Luckily, our men were able to purchase raw meat. We used that to subject the sample to DNA (Deoxyrebonucleic acid) sequencing test,” said Corpuz.

Corpuz said they needed the raw meat as sample for the DNA test because cooked meat can no longer be used for DNA testing.

The DNA testing, which was conducted by UP Diliman, reported that the DNA of the sample meat bought in Pasil matched by 99.83 to 100 percent with the DNA sequence of Chelonia mydas, the scientific name of green sea turtles.

“We received the DNA result and immediately, in coordination with the NBI Environmental Team division, Cebu City LGU and the DENR Regional office, we created a team to go and arrest these people who are selling pawikan,” Demelletes said.

He said the pawikan meat was stored in a cooler inside the eatery.

The body parts confiscated were those of five to six juveniles and the adult green sea turtle.

“We will work on that in our follow up investigation. We want to identify where the supply is coming from because we want to cut this business from there,” Corpuz said. 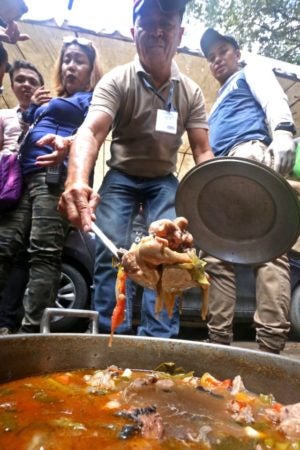 A stew of sea turtle meat and about 60 kilos of raw green sea turtle meat or pawikan were confiscated by NBI-7 and DENR-7 operatives along Rallos St., Barangay Pasil, Cebu City on Tuesday. Pasil is a known hotspot for the illegal trade of endangered species including green sea turtles.
CDN PHOTO/ LITO TECSON

At 4:56 p.m. on Tuesday, charges of multiple counts of possessing, trading, and killing endangered species have been filed against the five suspects.

All offenses are bailable.

Following Republic Act 9147 or the Wildlife Resources Conservation and Protection Act, trading of endangered animals or their by-products is punishable with imprisonment of at least six months to one year with accessory penalty of P10,000 to P100,000.

For the slaughter of the pawikans, the suspects may be imprisoned for six to 12 years and a possible fine of P100,000 to P1 million.

The green sea turtle, according to the World Wildlife Organization, is one of the largest species of sea turtles as it can grow to as much as 150 to 400 pounds or up to 180 kilos.

“Green turtles are found mainly in tropical and subtropical waters. Like other sea turtles, they migrate long distances between feeding grounds and the beaches from where they hatched. Classified as endangered, green turtles are threatened by overharvesting of their eggs, hunting of adults, being caught in fishing gear and loss of nesting beach sites,” an article in the WWO website reads.

Sea Turtle Conservancy, an organization that advocates for the protection of marine wildlife, estimates that there are only about 85,000 green sea turtles living.