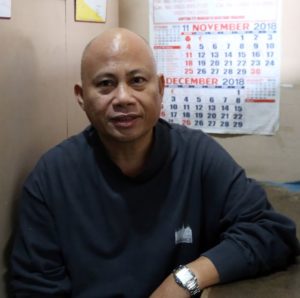 What’s important is their newspapers are brought to them and no one will end up looking for a copy or that we have ran out.

He said that he found joy in distributing newspapers to subscribers in the wee hours.

Andol, a resident of Barangay Mabolo, Cebu City, would head to the CDN office at the North Reclamation Area as early as 2 a.m. daily to pick up about 300 copies of the newspaper.

He then loads them on his motorcycle.

By 3 a.m. Andol starts to do his route, delivering copies of the newspaper to subscibers and news stands in his assigned areas within Cebu City.

About 40 percent of CDN’s subscribers live in Cebu City.

“Ang importante lang gyod mahatdan namo sila og newspaper ug walay mangita or mahutdan (What’s important is their newspapers are brought to them and no one will end up looking for a copy or that we have ran out),” he said.

Because his work delivering newspapers only happens in the morning, Andol said that he is able to spend the rest of the day with his family and two children. 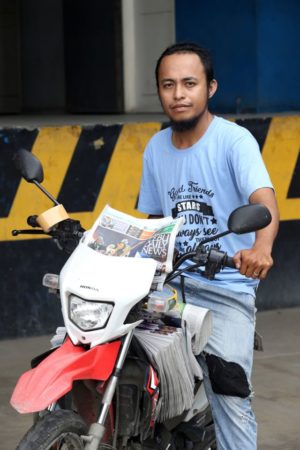 I feel happy to see people reading the news. I feel that, in a way, we are helping them.

For Oscar Robles, a CDN dealer for 20 years, his job is not just plain work but service to the public.

“Makaserbisyo gyod ta sa mga tawo bisan ug unsa ka sayo momata pa (We can really serve the people even if it means we have to wake up early),” said Robles.

Robles’ work is to ensure that CDN copies reach the towns and cities of southern Cebu as early as possible.

And so at 2 a.m. daily, the 54-year-old dealer, is busy loading piles of the newspaper into southbound buses.

According to Robles, his brother Randy, who also works at CDN, asked him to join the newspaper’s Circulation Department.

“Naganahan ra sad ko hangtod karon (I have liked the job since),” he said.

To help support the needs of his family, Robles eventually established a pasalubong (souvenir) store at the Cebu South Bus Terminal (CSBT).

His eldest son, who was able to graduate from nursing, is now working abroad.

His youngest child is a first year college student taking up anthropology at the University of San Carlos (USC).

Robles is grateful to CDN for being instrumental in improving the life of his family.

There are more than a dozen CDN dealers like Robles and Andol who supply copies of the daily to the about 200 newsboys who sell newspapers on the streets.

CDN Circulation Supervisor Garry Gesalan was grateful to the dealers and newsboys.

Gesalan however noted a decline in the readership of all printed newspapers because of the rise of social media as a primary source of information.