Another successful swim for ‘Pinoy Aquaman’ 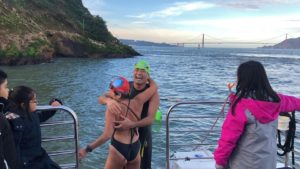 INGEMAR Macarine, also known as the “Pinoy Aquaman,” reconquered the icy waters of the Bay Area in San Francisco by swimming from the Golden Gate Bridge to the Alcatraz Island in probably his fastest swim to date.

The 42-year-old lawyer and environmentalist from Bohol teamed up with Filipino American cold swimmer Lisa Amorao in this gruelling and treacherous six-kilometer swim that they completed last Sunday December 23 with an astonishing time of 49 minutes.

The swim was Macarine’s 32nd successful open-water swim and his second time to conquer the Bay Area’s waters. The first was in 2014. Just like his previous efforts, Macarine was swimming to promote cleaner seas in the Philippines.

“It was very cold, although we were very fast but the most challenging part was the freezing temperatures of the water, which is 53-degree Fahrenheit and the air temperature is 49-degree Fahrenheit. It is a lot colder than the English Channel,” said Macarine.

It was Macarine’s first swim after a year of rest to nurse an injury. To prepare for this successful swim, Macarine had a series of short swims in the Philippines as he has to shed off as much as 13 kilograms of his weight.