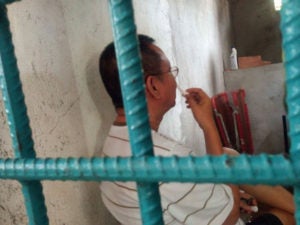 Mandaue City police arrested on Wednesday night the parish priest of the Nativity of Mary Parish in Barangay Canduman on accusations of child abuse.

Rev. Fr. Decoroso Olmilla, 61, will face a complaint for the violation of Republic Act 7610 or the Special Protection of Children Against Abuse, Exploitation and Discrimination Act.

Olmilla refused to comment on his arrest. He said that he would only issue a statement once a complaint is filed against him.

PO1 Jinelyn Formentera of the Women’s and Child Welfare Desk of Canduman Police Station said that the 15-year-old daughter of Olmilla’s cook has accused him of physical and verbal abuse.

The girl alleged that Olmilla cussed and hit her butt with an empty box after she failed to feed his two pet Labradors on Wednesday afternoon.

Olmilla also kicked her on the body, the girl told the police.

“The child went around their neighborhood to ask for Christmas presents. The priest was looking for her because the dog has not been fed yet. When she arrived at the convent around 6 p.m., the priest reprimanded her and brought her to his office where he cussed at her and hit her,” Formentera said in Cebuano.

Formentera said that the girl sought help from a neighbor, who later called the Canduman police to report Olmilla’s alleged abuses.

An hour after, policemen went to the convent to arrest the priest.

Formentera said that the girl and her 44-year-old mother also went to the police station Wednesday night to formally lodge a complaint against Olmilla.

The girl’s mother has worked as Olmilla’s cook for the last five years.

Formentera said that the girl’s mother was firm with her decision to file a case against Olmilla.

The mother has also confided with her that it was not the first time that Olmilla physically abused her daughter.

But some parishioners said they find it difficult to believe accusations of child abuse against Olmilla who has introduced several innovations on their parish since his assignment six years back.

Msgr. Joseph Tan, spokesperson of the Archdiocese of Cebu, said that he visited Olmilla at the Canduman Police Station detention cell on Thursday afternoon to check on his condition.

“I am not familiar with the circumstance of the case because we did not speak about that. However, the Archdiocese respects our system of justice. The Archdiocese will abide by the legal measures that may come up,” Tan said in a separate interview.

Tan said that Olmilla will have to spend for the services of a lawyer since his child abuse case was something “personal” and did not involve his being a priest.

Tan said that they will also have to determine if there was a need to already relieve Olmilla from his post.

Read Next
Police kill one, collar three others in recent anti-drug operation