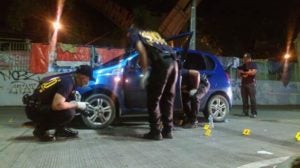 The victim was identified as Giovanne Collamat based on his driver’s license.

Collamat was reportedly traversing Mantawe Avenue in his blue Chevrolet Aveo vehicle and was about to make a u-turn beside the Cebu International Convention Center when he was shot.

A medical team rushed to the site and brought the victim to the hospital.

The police are still investigating the incident at press time.

Chief Inspector Aldrin Villacampa, chief of Station 1 of Mandaue City, said the perpetrators may been on a motorcycle when they shot the victim. bjo