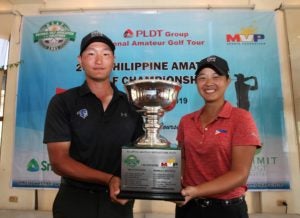 Cebu City, Philippines – Ace Cebuano golfers Lois Kaye Go and Gen Nagai grabbed the spotlight as they captured the titles in their respective divisions at the close of the Philippine Amateur Open Golf Championship on Sunday afternoon, January 6, 2019, at the Riviera’s Langer course in Silang, Cavite.

Go bucked Bianca Pagdanganan’s backside comeback attempt with clutch par putts in the last two holes, to capture the women’s crown with a 70 that proved enough for a one-shot victory.

Nagai, on the other hand, nipped Vanchai Luangnitikul of Thailand with a birdie on the second extra hole of a three-man playoff against Singapore’s Lucius Toh to hoist the men’s crown.

Go believed she had the championship in the bag after soaring to a four-shot lead at the turn, but Pagdanganan came roaring back with three birdies in the last nine holes, including back-to-back feats from No. 15 to pull within a shot.

But she could not cap her rally with failed birdie opportunities from long range in the last two holes and Go, the sister of Cebuano ace hotshot Lloyd Jefferson Go, maintained her poise and matched her Asian Games gold medal teammate’s pars to nab the country’s premier championship on a 72-hole 285 total.

“I got a little bit rattled after she (Pagdanganan) birdied Nos. 15 and 16. But I stayed relaxed and told myself to just take it easy,” relayed Go, who trailed the fancied Pagdanganan and Thai ace Atthaya Thitikul with a 71 in the first round, closed in on the duo with a gutsy 74 in tough conditions Friday then pulled ahead with a 70 in windy conditions during Saturday’s action.

On the men’s side, Nagai and Toh fought back with similar 71s to forge a three-way tie at 298 after 72 holes as Luangnitikul fumbled with a 72. But Toh bowed out early with a bogey on the first playoff hole (No. 18), then Nagai struck a solid approach shot to within four feet for birdie on their next return to No. 18 to beat the Thai, who missed the green, for the crown.

“I played my best game today (yesterday) this win will bring me more confidence as I head back to the US,” said Nagai, a former Philippine Junior champion and member of the Seton Hall University Athletics. /bjo