NBA: Russell leads Nets past Bulls for third win in a row 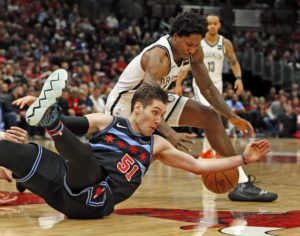 Jarrett Allen added 19 and six rebounds as the Nets improved to 12-3 in their last 15 games, matching their best 15-game stretch since moving to Brooklyn in 2012.

Zach LaVine had 27 points for Chicago and Bobby Portis scored 17 in 20 minutes off the bench after missing seven games with a sprained right ankle. Kris Dunn added 16 points.

Russell topped 20 points for the fourth straight game and is averaging 26.5 points in the span.

Both teams started slowly with the Bulls hitting just one of their first eight shots and the Nets connecting on just three of 10. But with Carroll kicking in nine points, Brooklyn moved ahead 28-21 after the first quarter.

The Nets opened a 12-point lead when Russell hit a 3-pointer 58 seconds into the second quarter.

Led by energized play from LaVine and Porter, the Bulls roared back to briefly take a one-point lead before the half, then settle for a 55-all tie at halftime.

LaVine had 16 points and Portis had nine in the second quarter. LaVine made five straight baskets — four on driving layups, plus a 3-pointer — in a 3 ½-minute stretch to put the Bulls back in the game.

Russell had 10 points and Allen had nine at the half, then both kicked into a higher offensive gear to start the third as the Nets pulled out to a another 12-point lead midway through the quarter. Russell hit three straight 3-pointers in 2:31 stretch.

The Nets settled for an 88-82 lead entering the fourth quarter, then used a 16-5 run to seal the victory as Russell kept rolling.