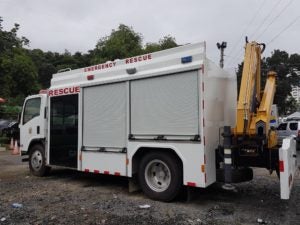 This is one of the rescue vans that will be stationed in key areas during the Sinulog Festivities. | photo by Rosalie Abatayo

Cebu City, Philippines – Aside from deploying emergency responders, the two new modern emergency rescue vans of the Provincial Disaster Risk Reduction and Management Office (PDRRMO) will also be positioned in key areas in Cebu City for the Sinulog 2019.

In fact, one of the rescue vans was already deployed, along with six PDRRMO personnel, at the Basilica Minore del Santo Niño during the start of the Novena Masses on Thursday, January 10, 2019.

Each rescue van has a mini clinic and rescue equipment capable of responding to emergency situations.

Tribunalo said the second rescue van will be deployed when the ‘Devotee City’ near  Compania Maritima opens.

The Devotee City will serve as temporary shelter for those coming from the different cities and towns of the province who come for the Sinulog feast day.

During the Sinulog Grand Parade on January 20, PDRRMO will be manning three emergency stations: near the Cebu South Bus Terminal along N. Bacalso Avenue, at the Devotee City, and in their command post in front of Cebu Technological University  (CTU) main campus.

Emergency  responders from the local DRRM offices of the different towns will be manning the emergency stations. /bjo