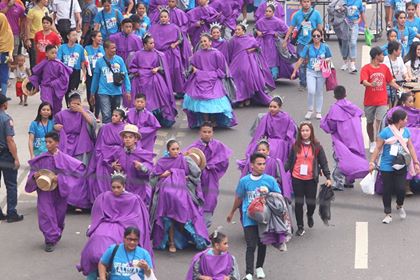 The Talisay City Central Elementary School contingent, the winner in this year’s Sinulog sa Lalawigan,  during the parade of participants held on Jan. 12, 2019 along Osmeña Blvd., Cebu City which  ended at the Cebu City Sports Complex for the  final dance and judging. /Photo by Tonee Despojo

But for Talisay’s production team, it was a performance dedicated to a friend and colleague who had passed away.

The story of life after death was the central narrative of the performance by students from Talisay City Central Elementary School, who, just this afternoon, were crowned champions of the Sinulog sa Lalawigan 2019 which started at the Capitol grounds and culminated at the Cebu City Sports Center.

This is the third consecutive win for Talisay City, and their sixth title since 2013. They took a break from the competition in 2016.

Marvey Caño, head choreographer of Talisay City Division, said their presentation was a tribute to a member of the production team who passed away exactly a year ago today, Saturday (January 12).

“He died due to cardiac arrest. We dedicate our performance to him. This is our tribute to him,” Caño told reporters in Cebuano.

He added that part of Talisay City Division’s concept this year stemmed from the Filipino tradition of offering prayers to the dead, especially during All Soul’s Day and All Saint’s Day.

“Until now, I don’t know what to really feel when they announced that we won once again. I felt happy, exasperated, anxious, nervous, grateful all rolled into one,” Caño added. 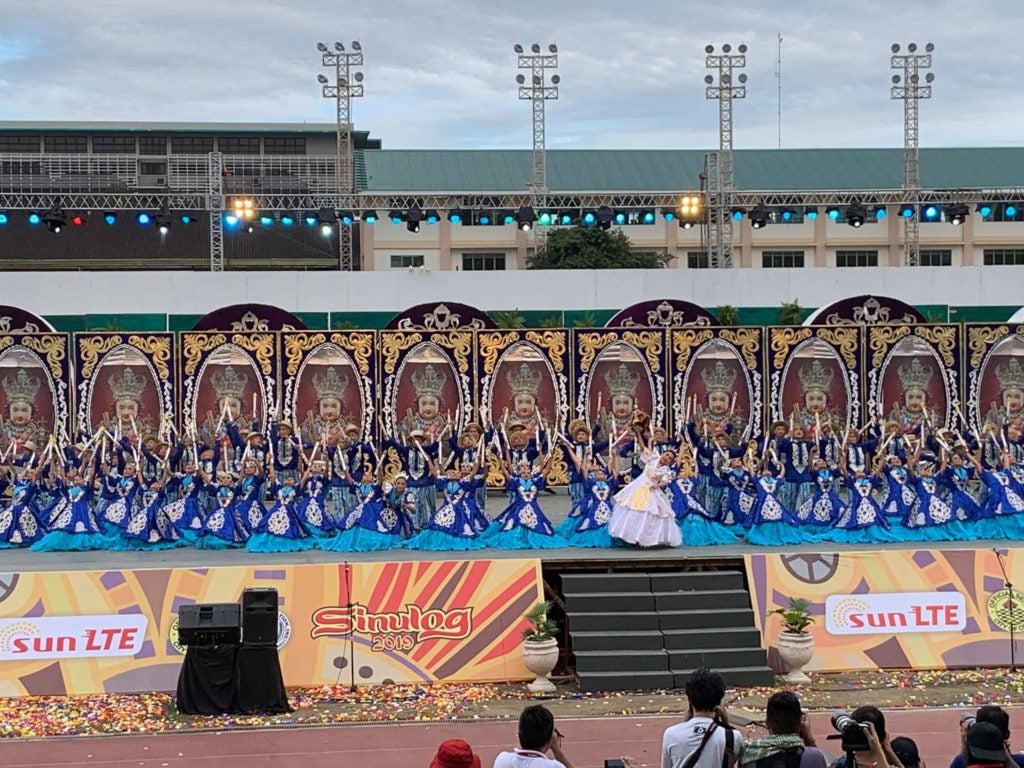 The Talisay City Central Elementary School contingent is the champion in the Sinulog sa Lalawigan 2019 held at the Cebu City Sports Center on Jan. 12, 2019./ photo by Marc Cosep

Among the five contingents who joined the competition, Talisay City gave the audience a little slap of reality by featuring a narrative on what’s life possibly like after death, dwelling on the question whether souls end up in heaven or hell.

Then the scene shifted to Señor Sto. Niño, carried by their festival queen, followed by other dancers who altogether carried a banner saying: ‘Our prayers bring souls to heaven, through the Holy Child Jesus, our savior’.

During the meeting between choreographers and the judges, the latter agreed that Talisay’s decision to incorporate death to their performance was a refreshing yet morbid take on the afterlife.

“Talisay has the charm, and focus on their dance… But yung flowers and other props, may casket dun di ba? Parang naging morbid na kapag nakakita ka nang casket doon. I think the flowers alone would do kasi it represents death na rin,” Rodel Fronda, chairman of the board of judges for the competition, told the choreographers. /rcg

Read Next
Cebu City Marathon fires off on Sunday