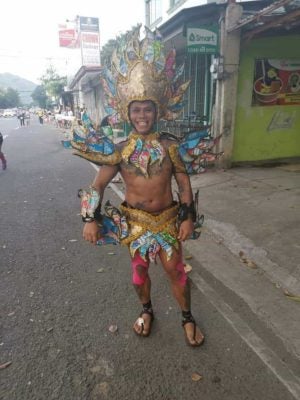 For the past six years, Dungog, a triathlete and ultra marathoner from the northern Cebu town of Liloan, has been joining the annual race held on the week of Cebu City’s Sinulog Festival garbed in colorful and avant-garde ensemble.

For the 2019 run, he chose to highlight the burden of being swamped with trash and the hardwork that comes with making a costume made of solid wastes and then wearing it for a long-distance run.

He said it was Tony Galon, event organizer and environmental advocate, who gave him the idea about his costume theme this year.

“He asked me if I can make a costume out of trash. I said ‘Definitely!’ I’m 40 (years old). I can really see the difference in the environment between the years when I was young and today,” he told Cebu Daily News Digital.

This realization motivated him to support “clean and green” initiatives since he moved to Cebu in 2010.

Dungog was an overseas Filipino worker in Dubai from 2005 to 2010 when he decided to move to Cebu, his father’s hometown.

“I wanted to move in an area close to the ocean,” he said.

He first joined the marathon in 2014, where he won second place for Best in Costume. That year, he wore a costume made of soft broom that weighed four kilograms. 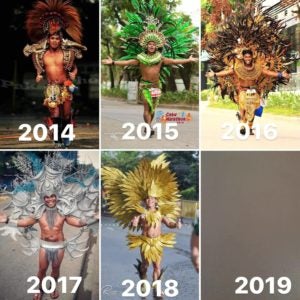 Since then, Dungog has been wearing festival-inspired costumes and ensembles.

Dungog collaborated with different designers over the years. This year’s costume was made by Rhamz Diacoma and Decem Branzuela Lucido. They have been Dungog’s co-designers since 2017.

In the last six years, Dungog and his co-designers utilized different materials such as ceramics, crochet, abaca, feathers, rubber, iron and EVA (Ethylene-vinyl acetate) foam in making his costumes.

Dungog is not a devotee of Señor Sto. Niño. He said asthma makes it difficult for him to breathe in crowded places such as the Basilica Minore del Santo Niño de Cebu.

But he believes that the Holy Child can grant wishes and miracles along with a person’s hard work and determination.

He said his participation in the annual run is an act of thanksgiving.

“I will run every year with costume as my way of giving thanks to the Sto. Niño for a fruitful year that was,” he said.

Crying to the finish line

He refers to 2016 as his “toughest run” because he had a difficult bout with asthma.

He wore an 18-kilogram costume made of abaca and feathers.

“My pacer was with me bringing along an inhaler to make sure that I was fine during the run,” he recalled.

Dungog recalls crying while running to the finish line.

Before running last January 13, Dungog said he did not set a target time to finish the 42-kilometer run.

Instead, he set his eyes on the goal to raise awareness on the responsible management of solid wastes and recyclables.

“(Doing so) is imperative to the health and function of every community. Let’s do our small share on the event day. Throw you trash in the garbage bins (that you find) along the way,” he wrote.

Dungog expressed disappointment over individuals he met during the run who carelessly disposed their garbage.

“Daghan ako nayawyawan (I scolded a lot of people) along the way regarding basura (garbage). I even explained (that) my costume is made from recycled materials,” he said.

Dungog said he finished the 42-kilometer run clocking in six hours and 30 minutes.

As he kicked off 2019 with a thanksgiving run, Dungog prays for another fruitful year where his advocacies in healthy living and lifestyle will flourish through a fully-functional gym.

“I have a gym now but I want to add more amenities,” he said. /bjo

Read Next
Sinulog Festival Queen 2018 to this year’s candidates: ‘Make yourself an offering to the Lord’