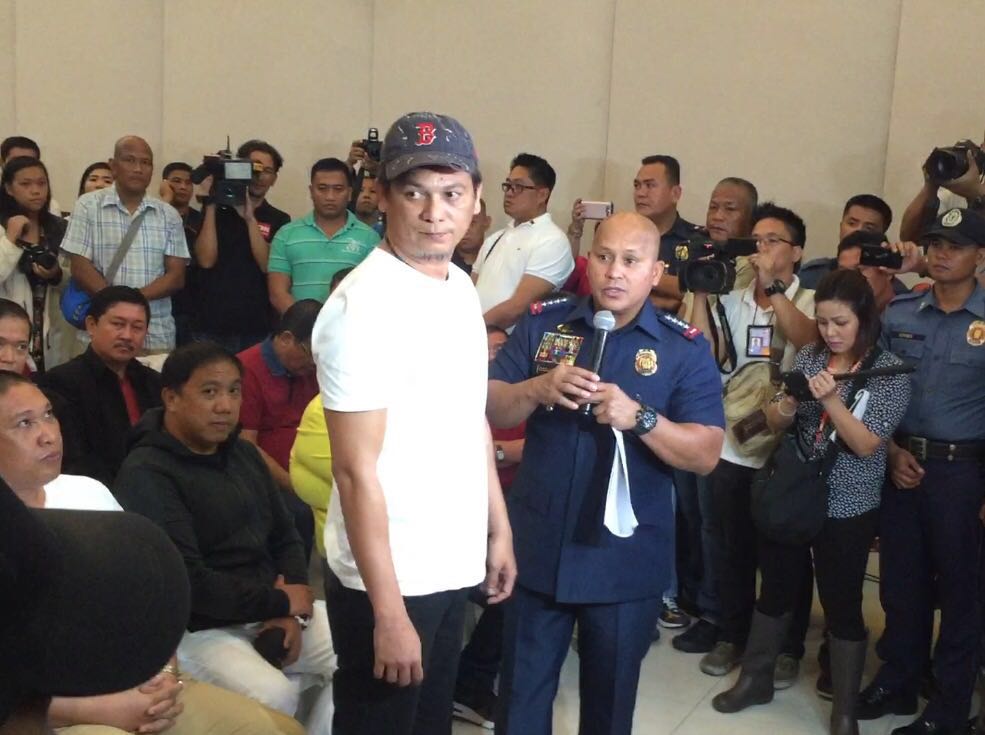 Franz Sabalones, whom the police tagged as one of the biggest drug lords in Central Visayas, surrendered to PNP chief Dir. Gen. Ronald “Bato” Dela Rosa in this August 2018 photo. /Inquirer.net file photo

CEBU CITY, Philippines — With the midterm elections scheduled in May, Chief Superintendent Debold Sinas, director of the Police Regional Office in Central Visayas (PRO-7), said it would not come as a surprise if members of the notorious Franz Sabalones drug group will try to regroup to fund the election of some local politicians.

“It has been proven that in the past, the Sabalones group helped fund (the campaign of) some of the (local) candidates,” Sinas said.

“We are trying to stop this,” he added.

Sinas said that while Sabalones have not been seen in San Fernando town, where he lives, since he surrendered to the police in August 2016, his underlings continue to operate their illegal drugs business.

The recent deaths of two suspected personalities linked to the Sabalones drug group was also an indication of continued movement within their ranks.

Tolencio Ababon was killed in an ambush while he was escorted by the police he on his way to the Argao Regional Trial Court on January 9, 2019 for the hearing of his drug case.  The ambush happened shortly after his arrest in a buy-bust operation on December 29, 2018 where in P10.2 million worth of suspected shabu was confiscated from his possession.

The next day, reelectionist San Fernando Councilor Reneboy Dacalos was also shot dead by a still unidentified gunman while he was seated outside of his sister’s sari-sari store in San Fernando town.

Sinas said that both killings may have something to do with the Sabalones drug group and probably the May 2019 election.

The two deaths remain under investigations since no perpetrators have been identified and arrested.

Sinas said that they are now paying close attention to the peace and order situation in San Fernando town located in southern Cebu that was earlier included in the Election Watchlist Areas (EWAS) of the Commission on Elections (Comelec) and the Philippine National Police (PNP). /dcb